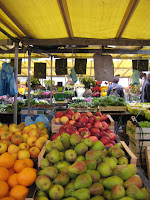 I wasn't sure what to expect this morning, waking up on the 10th anniversary of 9.11 in Paris.  The day started as I assume most of my Sunday's might - with a visit to my enormous farmer's market down the street to view the picturesque fruits, vegetables, cheese, bread, wine, clothes, scarves and much more.  After gathering some supplies for the next few days, I turned on CNN and became more emotional than I anticipated after listening to some of the families who lost people 10 years ago. 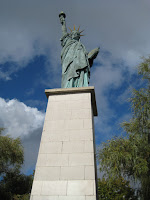 I decided to meet up with some American friends I had met here over 4th of July.  One of the girls is getting her masters in Paris and had heard at school about a service happening at the Statue of Liberty.  For those who are as rusty as me with their history, a french artist created the original Statue of Liberty and gave it to the US as a gift of friendship and peace.  They also have a replica in Paris, not far from the Eiffel Tower, and it was here where the service took place. 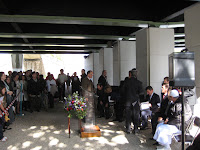 They had leaders from 3 different faiths giving readings in English and French for the Jewish, Christian and Muslim communities.  Everyone was respectful of each other and the crowd clapped for each. 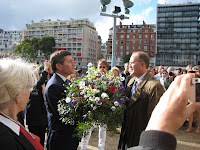 The US Ambassador Charles Rivkin also spoke very eloquently in perfect English and French about peace and unity, and then he laid a wreath down at the base of the Statue of Liberty while people looked on in silence.  It was a really nice service and also nice to see different faiths together and talking about wanting the same things.

Many people then walked along the River to Trocadero where they had set-up two pillars to look like the Twin Towers, and you could see the Eiffel Tower between them.  Both the American and French flags were set out on the ground and on the pillars it read, "The French will never forget."  Later, they were preparing for a concert with a full orchestra, choir and featured singers.  We were able to listen to rehearsal, and they were wonderful.  It was more than I anticipated seeing in Paris, and a very nice commemoration. 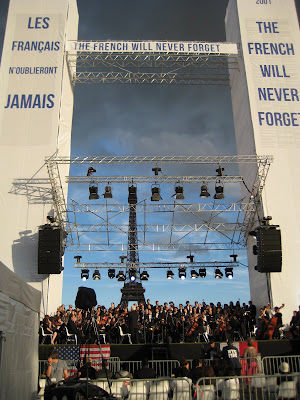 Email ThisBlogThis!Share to TwitterShare to FacebookShare to Pinterest
Labels: 9.11.11