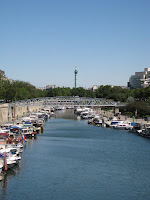 The Canal St. Martin has become my great playground running under, over and in the middle of my backyard. The Canal starts at the River Seine and then goes under the Bastille and under Rue Richard Lenoir, home to the glorious 3 city block long open air market, before emerging above ground again until it ends over 2 miles later into another park.  The Canal flows in the middle of the street, and is accompanied by trees, gardens and park benches, framed with a single lane of traffic on each side.  I love these long streets that cater to pedestrians, and in fact, Sunday's it closes to all traffic.
Napoleon ordered the creation of the Canal in the early 1800s to supply the city with fresh water, and then it was eventually used to move food, building materials and construction items through Paris.  There are a series of 9 working locks that stop traffic as the tourist's boats go through several times a day. 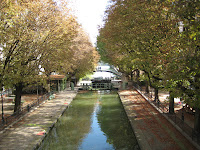 This has become my running path, and it's a fairly inspirational way to attempt to work off some of the fromage that has become a part of my daily life.  And yes, there are actually other people running this route as well.  I'm not sure what will happen when the weather turns, but I'm going to keep using this idyllic path as long as the ice stays away.

It's also now my velib path when heading east.  There is a designated bike lane lining the street as well, so it makes for a tranquil ride. 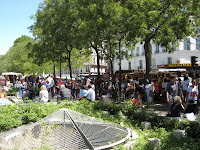 I also love this street for my market, which we'd call farmer's market in the US, but here I guess it's just redundant to say both. I have bought everything from wine to cheese to a grilled chicken to every fruit and vegetable imaginable and not, to purses, clothes, newspapers, jewelry, and a knife that will cut through metal.  The people watching is extraordinary, but the food is even better.
Posted by Kelly at 1:43 PM