Surprisingly, I didn't fail my French test last week, so they've pushed me on to the next course level, which includes a new, but identical, monochromatic, horse shaped room, and a new teacher who speaks even faster than the last one.  Day one, I was a little frustrated during group exercise when no one had anything to contribute to the baby announcement we had to write, and I tried to dig back to my "building consensus" days, which led to me writing most of it, along with the other American, who's been known to kill all the characters we talk about, but I managed to save the baby.  Day two, during listening comprehension, I could have sworn the teacher pulled a tape from the German class, because I couldn't understand a word, but luckily I ended strong with a mock phone conversation announcing my engagement.  Mock, I said, but now I'm ready to announce in English and French.  I'm all about preparation. 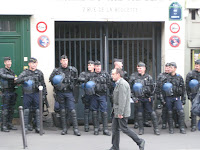 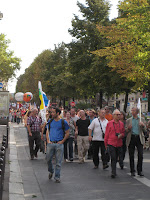 During class we could hear shouts from the street and we learned the teachers were demonstrating because a lot of jobs are being cut - sound familiar?  Ooo, my first protest.  After class I went outside and there was a long, orderly stream of people parading down a major street that was closed off for several blocks.  They held flags and carried banners and were very polite.  The weather was still nice out and the closed streets made for a  pleasant walk.  This protest, like the Techno Parade I had seen a week back, was overseen by hundreds of police on most corners, carrying weapons and wearing helmets.  Neither time did I see or anticipate the police getting involved. 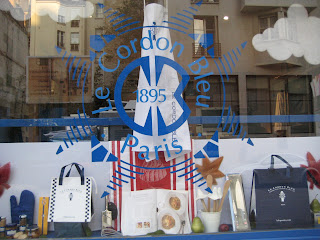 THEN, I started my first French wine class at Le Cordon Bleu.  Yes, 2 classes in 1 day.  You can imagine the stress I'm feeling.  I think I may need to stay a bit longer to unwind.  Cordon Bleu offers the same wine certification program I took in LA, but they also offer a specific French only module that they didn't offer in LA (why must everyone hate my people?).  So I was excited to dig in even deeper to the French soil to learn more. 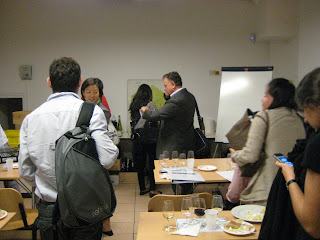 The class is taught in French by a Frenchman, and translated in English by a guy who is from the UK and actually my college friend's good friend.  I thought the two teachers would be confusing, but I actually enjoyed it, because I considered it a further extension of French class, and much more pertinent than learning how to express my excitement for a new enfant.  I could also understand more than I imagined by the French teacher, but I guess you understand what you want - babies, not so much.
It was a rapid fire 2 hour class and tonight we got our big binders, and then cruised through the Loire Valley, listening and tasting 5 good wines with 5 cheeses.  What's great is the teacher gave us more locals info talking about how it's an easy day trip from here - less than 2 hours.  Pouilly Fume - not so pretty, Sancerre - very pretty and go to the goat cheese shop there. Not sure I would have received that info in the US, and yes, I'm trying to figure out when to go.  The school actually conducts a few wine trips each year, hosted by our teacher, which I definitely would like to join. 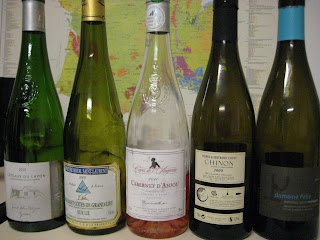 Some of you may remember me talking about my WSET wine class where we painstakingly had to each describe the color, clarity, look and smell - nettles or brioche anyone?  The french teacher just cruises through and tells you what he gets and the English guy talks about tea and crumpety things, down the hatch, have some cheese, and on to the next.  With only 2 hours per region, I suppose they have to do it this way, or I'll never get home.
So Tuesday's are now a big day of higher learning for me. Luckily the evening is capped with wine and cheese!
Posted by Kelly at 2:25 PM