My arrival into Paris was nothing but a cruel joke.  To land in one of the gastronomical capitals of the world with food poisoning was a lesson in extreme patience and self control. 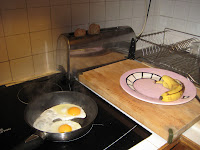 After 36 hours of eating a stale baguette with peanut butter, I eventually graduated to eggs (my first home cooked meal) and each day a new French delicacy was added until I was operating on full cylinders last night with an absolutely amazing meal at a local jewel down the street, Cafe des Musees.  On the menu, the dish I ordered was simply described as lamb, aubergine and spices.  I must admit I enjoy reading a good menu with each and every ingredient listed, where it was grown, and who it went to school with, so to get a French menu with just the word "chicken" on it, I realize there needs to be some trust involved.  I have now put my trust in several noteworthy chefs around town.  Merci beaucoup to you and your penchant for the understated. 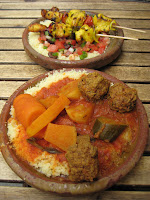 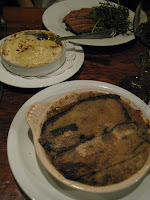 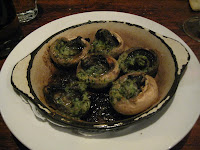 Sights
My friend Beth has arrived and we've been running around town trying to fill her Paris memory book.  I did hear her tell someone last night that she now likes Paris better than New York, so I'm assuming she's enjoying what she's seeing and experiencing.  It's hard not to like the plethora of parks that range from extreme Disneyesque curation to more wild, natural growth that are found on nearly every corner.  There is no shortage of places to read, write, and people watch. 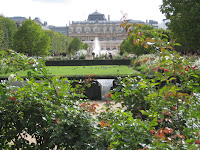 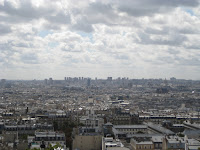 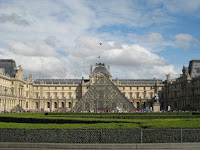 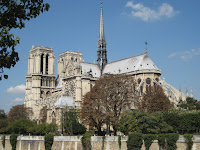 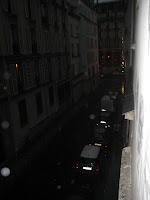 The first day I was on my feet, it was 80 degrees without a cloud in the sky.  It was a perfect summer day with a picture perfect backdrop.  That night when I got back to my apartment, there was a strong, but wonderful cross breeze blowing from my bedroom to my salon, aka living room/dining room/family room/guest room.  I got into bed to write a few notes and then a huge downpour began, followed by big bursts of lightning and thunder.  It was magical, and I didn't feel like sleeping, wanting to listen and literally feel the rain all night.  I left the windows open and enjoyed the sounds of a Parisian storm.  I think I may now need to dub my apartment the forest since I don't like to close anything up, but it does mean there are leaves everywhere.  Let's just hope the forest animals stay away.

The Local
Beth and I may have found my "local" - a spot where I can begin or end an evening close to my house where I'd feel comfortable by myself.  Call it my Cheers.  The Saturday night bartender, Alisandro was very welcoming as Beth was telling everyone who could understand English that I was new to town, living across the street, and could I practice French with any of them on a regular basis.  Alisandro is an Italian lover of women who wonders if man and woman can in fact be One like U2 says.  It may plague him for years, but he poured us welcome drinks after we already had a few, and then asked later how many we had because he couldn't remember. 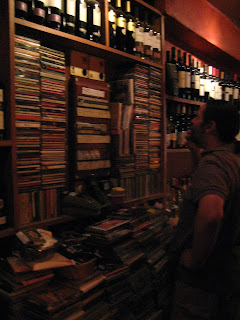 A dark featured Frenchmen stumbled up to us at one point and opened with, "what the f&ck?"  Evidently that was one of the phrases he had learned growing up in Santa Monica of all places.  His girlfriend kept coming up to retrieve him, and on the final try Beth tried to engage the poor girl asking what her favorite French restaurant was to which the pretty girl gave a slight snear and said, "I don't like French food."  Turns out she was Russian and just wanted to take her Frenchman home.

We met a nice American man living in Paris for over a decade who was bewildered on how we found the place, given that you won't find it in any tourbook.  And we've now befriended the owner who was nervous when I was trying to take pictures of the interesting bar scene of wine boxes lining the walls, next to suitcases, jars of pickles, and let's not forget the kids table when you first walk into the narrow room.  The music is fantastic and the place is perfect except for the one small problem that it serves horrific wine.  I  plan on working on some sort of wine sharing program where they share space with me there for my own personal wine to share with everyone else.

Beth and I are leaving Paris tomorrow to toast my move in Champagne! 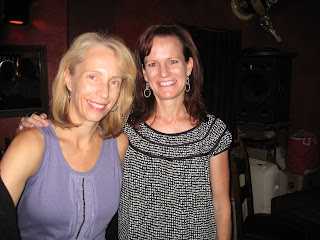