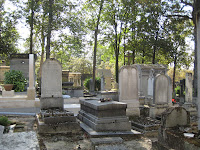 Stephanie and I set out on another Friday field trip yesterday.  We started with the Cemetery of Pere Lachaise, the largest cemetery in Paris, and the final resting spot from people ranging from Moliere to Morrison, Proust to Piaf, and war victims to Oscar Wilde. 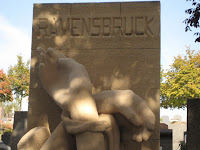 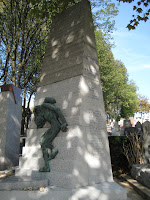 The cemetery is over 100 acres of sprawling plots, nestled between shady trees and lush grass, making it a really lovely and serene location to pay respects to those that have passed.  There are a number of memorials dedicated to the victims of Nazism and Fascism, as well as victims who died in an Algerian independence demonstration in Paris as recent as 1962.
There was a huge variance of tomb styles from elaborate constructions with handmade sculpture, to simple plots like those of Edith Piaf and Proust.
Jim Morrison's tomb was also simple, though many were gathered, and some even opened wine for a toast. 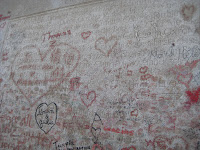 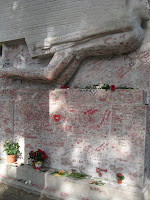 Oscar Wilde's tomb was a popular location and people showed their appreciation of Wilde through some interesting means.  Red lipstick kisses cover much of the open space, along with messages of love for the writer.  His living grandson appreciates the admiration, but evidently has paid for several cleanings, though the animal fat in the lipstick has stained the stone so he cannot fully remove it.  He wants L'Oreal to pay for the next cleaning. 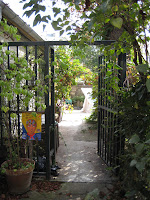 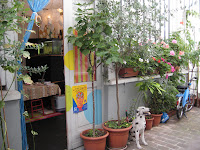 After walking around the cemetery for a while, Stephanie and I continued east to experience the annual "Portes Ouvertes," which literally means open doors.  The artists east of Paris opened their doors once a year to show their art, and also their homes.  It was a great combination of art and home tour.  We walked through Belleview and it's an area that's on the outskirts of town, so more affordable, but also still a little rough around the edges in some parts.  There's also a lot of musicians in the area and local venues for live music. 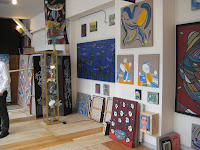 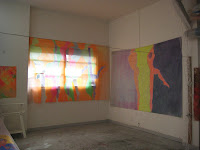 The art included paintings, sculpture, pottery, jewelry, photography, and mixed media installations.  The artists were all very friendly, encouraging us to come into their homes and one even told us to come right in and "put our noses" in his paintings.  Some served food and drinks.  Many of the homes were hidden down unassuming streets, but then opened into brightly lit courtyards with lovely outdoor terraces.  Was a fun day, and Stephanie is also the new owner of some Parisian artwork.
Posted by Kelly at 10:51 AM