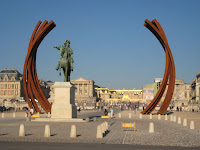 It was another 80 degree day today without a cloud in the sky and without a class on my schedule, so I decided to take the train to Versailles.  It's also my mom's birthday, so I thought I'd honor her by visiting the grandest palace in France. 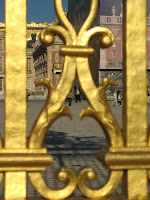 It was an easy 40 minute train ride from Paris and I bought my tickets online before I got there so I breezed through the entrance and into the palace, and there were the thousands of others who did exactly the same.  Luckily most were Japanese tourists, so I could get pictures over their heads, and once in the gardens, the crowds were a lot less noticeable. 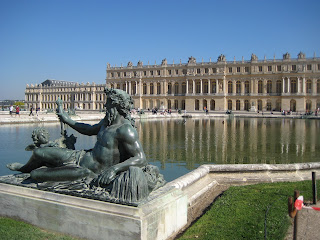 The story goes that Louis XIV hated Paris due to an unfortunate altercation where some nobles imprisoned him, so he got out of dodge, found some marshy land where his dad's hunting lodge was in Versailles, and 50 years, 36,000 laborers and 380 million francs later, voila, the grand palace.  He made all his peeps come out and live at Versailles, which was such a grand time, that no one knew what was going on at home, and there began the French Revolution.  Hopefully it was fun while it lasted.
There's so much to take in at Versailles.  I'll list just a few of my favorites. 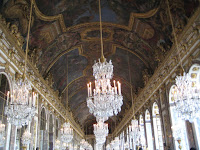 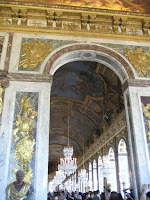 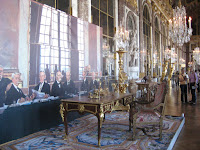 The Hall of Mirrors is impressive, not for how many tourists it can fit in the room (hence the ceiling shots), but for its magnitude.  It's 240 feet long with a myriad of chandeliers and candlesticks that Louis XIV would light so that over 3,000 candles would reflect in the 17 enormous mirrors throughout the room.  The Treaty of Versailles ending WWI was also signed in this room.
The bedrooms were also quite grand.  Reminds me of my apartment in Paris - well actually the bed size is about the same, minus the frame, matching spread, wallpaper and ornate chandelier above. 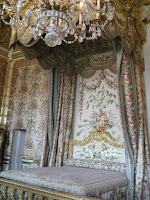 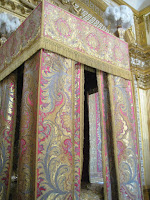 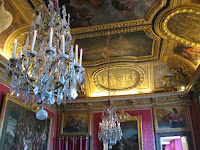 Then there's the 250 acres of park grounds with flowers, sculptures, topiary creature, fountains and paths that lead to other paths and canals.  There were runners, bikers, boaters and even golf cart drivers all throughout the park. 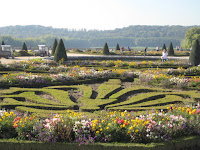 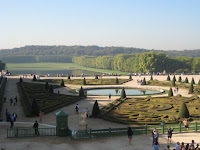 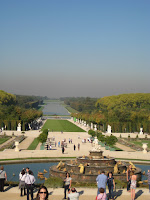 A mile from the main palace, Marie Antoinette created a little haven for herself, complete with a home (ok, maybe a few), theatre, farm and more casual dress code. 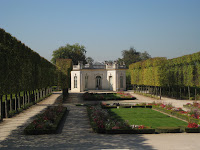 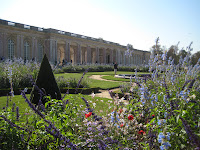 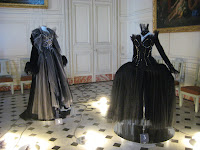 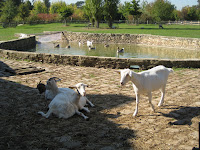 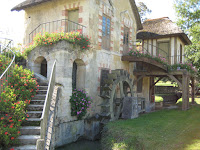 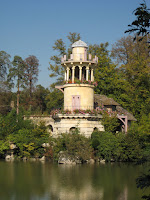 Another lovely day in a lovely place!
Posted by Kelly at 12:44 PM

Email ThisBlogThis!Share to TwitterShare to FacebookShare to Pinterest
Labels: Versailles