With the grace of a ballerina (a large, uncoordinated one), I have arrived

I was awake early this/yesterday morning with anticipation and a final check list before leaving for the airport. I also decided I'd take my farewell beach run as the sun was rising for a good image to house while I'm away.  My amazing friend Cheryl was kind enough to not only pick me up, but to also walk me into Tom Bradley to make sure Air Tahiti was in fact a legit airline, and that they would take my bags.  Check and check, and after a tearful farewell, I was off to the lounge.

I had a nice salmon, cream cheese, cucumber sandwich to tide me over, and then it was time to hit the gate.  When I got to the gate they were paging me, which is always a little concerning, also because Cheryl had now left.  She mumbled something about the seat, took my ticket and then gave me another one.  I had boked business class, and they upgraded me to first.  Things were going well.

First class on Air Tahiti had a bit of an exclusive club vibe and the party was in full swing when I arrived.  There was only one row with 6 seats across and everyone was mingling.  I heard something about a movie being produced by one group and music being produced by another bearded, scruffy gentleman who ended up being my seatmate.  After he realized I wasn't French (I was attempting to read French Elle, but honestly was just looking at the pictures), he chatted me up. 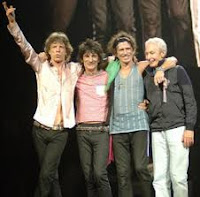 My plane partner has produced all of the Rolling Stones albums for the last 20 years and was on his way to Loire Valley to see "Mick," and I'm not at liberty to say what they were going to do, but the news should be out soon.  I asked if he would be doing any travel outside of the Loire, and he said he was going to go up to Belfast for a few days to see his pal Van Morrison.  He's hoping to convince him to produce his next album.  My current hope is that the cab driver at Charles de Gaule knows where my apartment is and that he takes credit cards.  No and no by the way. 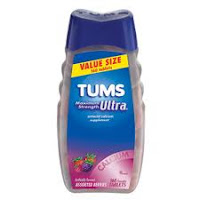 Needless to say, he was an interesting conversationalist with many interesting stories.  We talked through a lovely meal and wine, and then time for sleep.  I woke up halfway through the flight with a not so happy belly, and then proceeded to get sick most of the remainder of the flight.  Oh yes, good times.  After learning everyone else in the club was fine, I blame it on the salmon in the lounge, and a weak stomach, or 30 goodbye parties before I left.  So as quickly as I was up, I just as fast went down in flames.  I can only imagine the smells that my new friend was going to be bringing into Mick's lovely hillside chateau.

Luckily the First class club was handwalked through customs bypassing all people in line and simply flashing our passports to security who basically just waved us through without so much as a stamp, which is interesting since there is now no record of my entry into France.  Hmmmm.  I limped along and managed to keep my insides in tact long enough to get my bags and get a taxi. 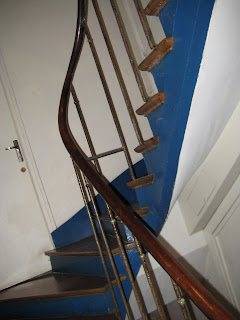 Not much English was going on in the taxi, but I threw down some recently learned French, rolled an "r" or two, and only after one circle around the block I arrived at my place, fully ready to collapse.  Unfortunately before I could collapse, I had to get my 2 major bags weighing over 150 pounds collectively up two narrow flights of stairs with hairpin turns.

After getting locked in the apartment building entryway for a period of time, and thinking the stone floor actually looked inviting, I made it through and up to my apartment where someone was walking out of it.  There was surprise and then I come to understand that she's a friend of my landlady's ensuring everything is ok.  It would be if she had a case of tums with her.  She was actually extremely helpful and assisted with carrying my bags up and then she went out and got me fresh fruit and a bottle of rose.  I hope I can partake in each at some point soon.

My friend Jen called which was nice to hear the home phone ring and actually have it be for me and from a local no less.  We were supposed to get together today, but I'm currently working on getting my head and body in one piece so here's hoping a good night's sleep and this baguette (with Skippy peanut butter on it - thanks for the care package Sue!)  will turn me into a new person as my first visitor arrives in the morning.

Despite it all, I can't believe I'm here.  The apartment is adorable, my bags are quasi-unpacked, and the sounds out the window are all new and vibrant.  The weather is beautiful and there's a great breeze flowing through my place.  I'm looking forward to getting out there and experiencing Paris!
Posted by Kelly at 11:49 AM