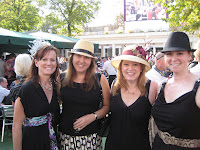 Today, was the 90th Qatar Prix de l'Arc de Triumphe, which means what?  It means getting dressed up and wearing a fancy hat to the horse races.  This is the largest horse race in Europe, with the most prize money, and the Parisians, as well as the English, came out to play.  Many Brits came over for some good racing and big betting. 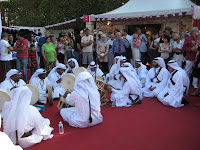 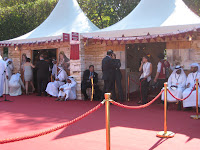 Qatar supplies the prize money and I'm also guessing that they hired a new PR firm recently as they had a whole village set-up for people to come in and take pictures with them, hear their music and see some local exhibits of their country.  They're also promoting pure bred Arabian horse racing, and the Arabian World Cup race was held today as well, but unfortunately that was not my race to win. 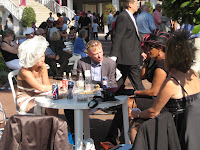 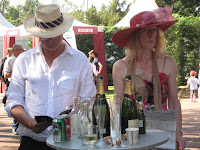 I came for some great people watching, or more specifically, some fabulous hat watching.  The Royal Wedding made the "fascinator" the hat du jour, and luckily for me, my friend Beth had one to lend me for the races.  Anyone wearing a hat, also got in for free, so we all managed to find a hat, and even my friend Doni got in with the only hat she had with her, which was a rain hat. 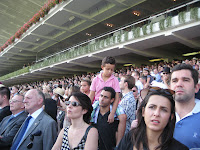 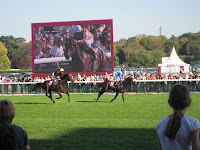 Our splits of champagne in hand, we were able to walk down right to the rail of the track to watch the races.  We read what we could in the books describing the races, horses, and jockeys, and then made some guesses and gestures to place a few bets.  My first bet (on USA of course) made me a big cash winner, but the next race, I'm not sure my horse even made it across the line, but it was still an enjoyable experience.

How to cap a fun week-end?  Grab some Mexican food - yes, in Paris. 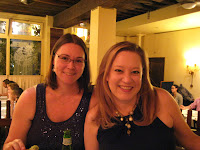 I must admit that this is my second foray into Mexican food in Paris, and the first time actually wasn't half bad.  I joined some Americans who were desperate for the taste of chips and maragaritas and we went to Anahuacalli in the 5th.  Walking in, you feel the old familiar smell of a good Mexican spot, but how will it taste? The margaritas were surprisingly good and the Negro Model was a welcome drink after.  We started with a generous portion of guacamole with big chunks of avocado.  Yes, it could have used a few more spices, but you could work with it, and tap into your guac memories to round it out.  The chips were light and crisp as well. 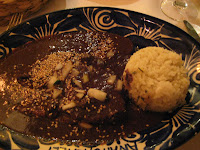 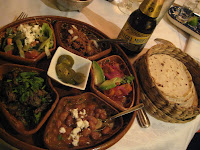 I had a very nice turkey mole that was sweet, but robust in taste.  There were tacos, flautas and chilli rellenos on the table and everyone was pleased with their dishes and the memories of good Mexican food came flooding back.  The service was pretty dreadful, but I guess chalk that up to Paris.  Will this place be replacing any of my favorite Mexican spots in LA?  Not so much, but a very worthwhile substitute until I'm home again. 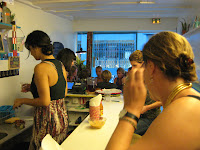 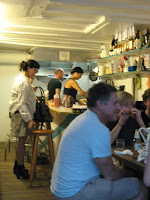 Today's Mexican spot was called Candelaria and isn't far from my place.  It's a tiny little dive with one communal table up front, and a bar with a handful of stools along the side, which is pretty much like a kitchen counter where you can watch your food being prepared.  I'd say this place was more of an "interpretation" of Mexican food as they're trying out some different things, but still in the Mexican stable of items.

We tried the guacamole which was not a big portion, but even better than Anahuacalli's with more flavor and depth, though the chips were a bit too thick and overcooked.  No margaritas, but Negro Model hit the spot. 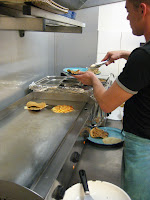 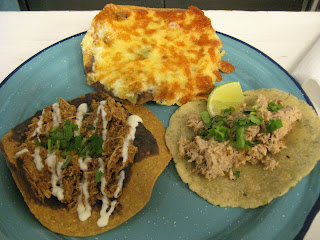 I had a carnitas taco which was pretty basic, but on a wonderful, homemade tortilla.  The homemade salsa was in a bowl and was passed around to everyone on the counter.  It was orange with a kick and creamy texture signaling some nice use of Mexican cheese.  Next was a "tostada" with pork in a nice mole sauce with some fresco drizzled on top.  The real winner was the vegetarian taco with mushrooms, peppers, olives and of course glorious cheese on the great homemade tortilla.

The menu is posted on a little blackboard and changes daily and from lunch to dinner depending on what they feel like making.  I know I'll be back to try some more!
Posted by Kelly at 1:40 PM