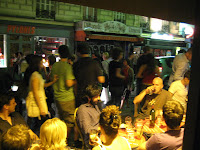 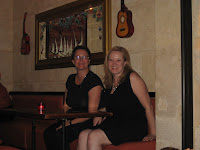 Last night was the 10th annual Nuit Blanche Paris.  Every year, artists from all over the world gather to show their work in the streets of Paris.  It's a 12 hour marathon from 7pm to 7am, Saturday - Sunday.  There are exhibits set up in several different neighborhoods and the metro runs late so you can visit as many as possible.  The weather has remained warm and dry, so every homme, femme et enfant was in the streets of Paris until all hours.  I'm pretty sure there were 2 year olds who stayed up later than I did. 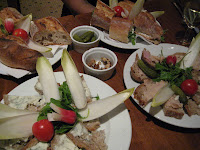 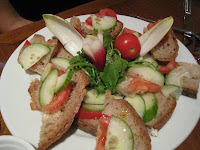 We started in the Marais with an early dinner at 6:30 to get our energy.  Eating at that hour is no easy task as most restaurants don't start serving dinner until 7:30, so we carbo loaded with many little snacks of bread with cheese, pate, and the comical "vegetable" selection which was tomato and cucumber on bread. 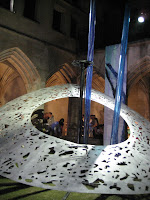 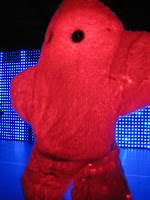 The Marais was wall to wall with people, but we saw a colorful and furry red creature, as well as an interesting sculpture in a beautiful courtyard.
We decided to venture up to Montmartre to see if we could escape some crowds, but people were everywhere, which you could say it's nice to see people supporting art.  We saw a movie of a single screen where they just blew up a design they created.  There were also salt creations in a stunning old church. 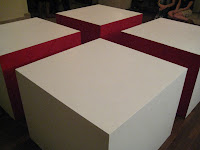 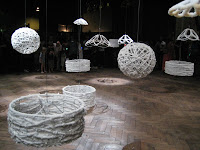 We waited in line for nearly an hour to see what looked like 4 white boxes in a room with creepy sounds.  After an over enthusiastic artist explained in great detail to me, and none of my other friends, how he caressed the boxes like a human body with his hands, and chopped, chopped them, I understood a little more, and even was given his contact information - for buying art or further discussion of the human body, I don't know.
The final installation we saw was a remarkable illumination of candles at the base of Sacre Coeur, designed to mirror the Parisian sky.  In the dark, it was quite impactful.
Posted by Kelly at 12:28 PM