A Return to the Kitchen and....You Going to Drink That? 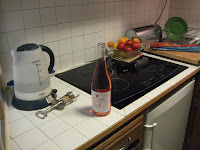 Now that the weather in Paris has returned to what I've been told is normal fall weather, ie., cool, gray, and always a chance of showers, I have returned to the kitchen.  As most of you know, my "furnished" apartment here has everything except an oven (and a dishwasher, garbage disposal, full size fridge, bathtub and room to stand in the kitchen or shower), but the only thing I'm really troubled by is the lack of oven given my love for cooking.  When I sounded disappointed to my new landlady about not having an oven, she said innocently, "What do you need an oven for?"  To my example of roast chicken, she said the French make the best roast chicken, so don't even try and compete. 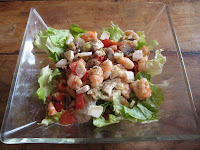 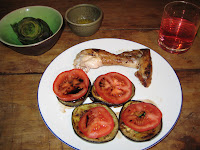 I took this new challenge as an opportunity to expand my stovetop culinary prowess.  The first month, I kept things pretty simple.  I'd walk through the farmer's market each week and let the produce do the talking - whatever looked good, I bought, came home and sauteed to have alongside my roast chicken.  I expanded into fish whose names I can't pronounce or remember, but really enjoyed eating.  Now that the cooler temps are upon us, I knew it was time to take it up a notch. 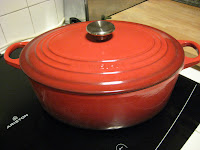 I'd been told by many about the joys of Dutch Oven cooking, but I didn't bring one with me, though I had a list of places in Paris where you can buy good French products at discounted prices.  So after french class one day, equipped with some research and the words, "Creuset," and "casserole," I ventured into the cooking stores around Les Halles.  Some of the prices and displays were over the top, but then I found her, and ok, I found a man who could speak decent English because I was pretty tapped out after my 2 words.  She's a lovely oval, red, 5 quart Creuset Dutch Oven, and I couldn't be happier.  It was love at first sight with a great price to match, so I took her home, and thank goodness she fit in the basket of my velib basket as that would have been a trying walk otherwise. 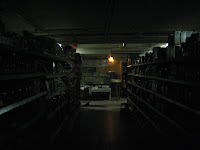 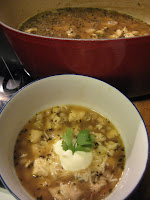 I posted a picture of my new Dutch Oven on facebook and asked for recipes, and thanks to everyone for all the suggestions I've already received.  That should get me through the winter.  I had gone to the grocery store before all the recipes came in, and decided I'd go with an old stand by of chicken chili with white beans.  The recipe may not really require a dutch oven, but I had the recipe and I was ready to test out "Big Red."  While shopping with all the rush hour commuters, the lights went out in the store, which really didn't seem to phase people.  They kept on shopping with the lights from their cell phones - maybe they had a new dish to get home to as well.  Luckily the lights weren't out for long so I finished up and went home to make chili. 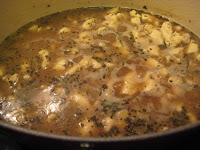 I have to say, I think it turned out really well with good flavors of cumin, oregano and cilantro and a kick of jalapeno and red pepper.  It worked perfectly with a glass of Bourgogne Aligote, which I picked up in wine class this week - literally.
This week in my Cordon Bleu French vino class, we got to dive into Burgundy, which surprisingly only constitutes 6% of the French winemaking area, and 1% worldwide.  You have your 3 Cotes, with the top 2 being Cote de Nuit and Cote de Beaune.  Cote Challonais is the runner up, but then you also have Chablis in the north and Maconnais in the south.  The vineyards are pretty spread out across a large area of land, and I'm looking forward to visiting later this month. 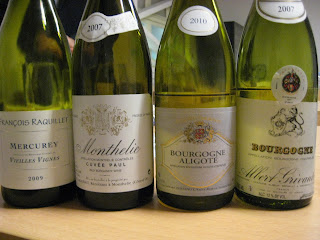 Grand Cru is the top dog label to have on your wine and only 3% of wine from this area get this mark of designation, and you will pay for it.  The Grand Cru mark has become so competitive that to this day, there are still arranged marriages happening between cousins to keep parcels of land in the family.  The teacher also joked that this is also why you'll see some crazy looking people down there because of the in breeding.
After class, I was chatting with this nice English girl and American guy and they want to start meeting after class to drink more wine and review our notes.  Sure!  The guy also invited us to join a wine club he's starting.  Sure!  The room was now empty except for the 3 of us and we're all standing there and the girl who is also taking culinary classes at Cordon Bleu says, you know that they just throw away this wine after we leave.  What?!  She said yeah we should drink it or take it home.  There are 2 people cleaning up the room around us and one of them comes back with plastic cups in her hand so we can continue to drink.  The girl and I end up each taking 2 bottles of the unfinished wine home, and that's going to be the start of a wonderful thing, or my demise.  I also recommend the Bourgogne Aligote as a good pairing to something with a little spice.  It's inexpensive, refreshing and in my teacher's words, a good wine to drink when you're thirsty!
Posted by Kelly at 1:12 PM