Stepping Away From the Snails

This may comes as a shock to some, but there are chefs in Paris who don't serve cassoulet, escargot or a cut of meat that size of their Smart Cars.  There's some cooks here who are branching out and bucking the traditional French system with unique tasting menus designed to give more modern tastes to a new breed of diners.  They had me at tasting menu.
Au Passage 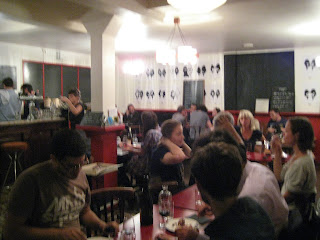 Visitors who can find Au Passage, tucked off a small street, off another Beaumarchais side street, will be handsomely rewarded for their efforts.  Stark tables, mismatched chairs, and even a lounging couch area dot the small room, with a bar that leans heavily inward, giving you the feeling this place has been here forever, even though it's only been open a few months.
The chef comes from hot spot Spring and is offering a small, but strong, revolving, chalkboard menu, complete with the latest farm fresh ingredients.  It feels like you're dining at a friend's house, maybe because after our wine was poured, the bottle was left absentmindedly on our table, and the waiter seemed surprised we didn't refill our glasses.  Diners also look and converse about the plates next to them before placing their orders. Our neighbors had just dined at Au Passage for their excellently valued prix fixe lunch that same day and loved it so much they came back for dinner. 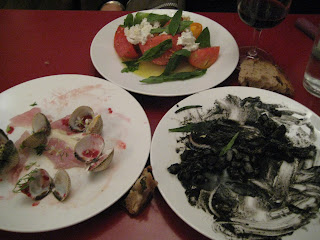 It's a small plate menu to complement the nice list of wines.  We had a grilled octopus which looked to be producing a squid ink black die on its surrounding beans, making for fun art with their rustic, crusty bread.  I couldn't pronounce most of the words in the escabeche, chinchard and clam dish, but we were told it was a winner, so we tried the slightly chewy, fresh fish dish and enjoyed the taste and picturesque plate. A typical heirloom tomatoes, burrata and basil salad didn't disappoint.  What was disappointing was that there was no chocolate for dessert, so alas, another glass of wine instead.
La Gazzetta 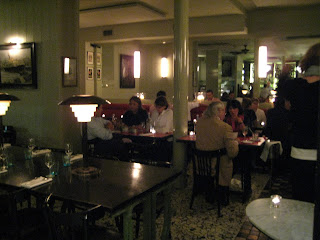 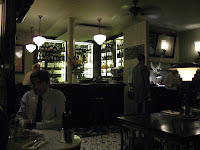 There's a Swedish chef behind the stove at this place, so you know it has to be different.  There's an ever changing menu with the latest and greatest from the fields, and the night I was there I ordered the 7 course menu and my friend ordered the other option of 5 courses for 52 and 39 euro respectively.  The atmosphere is calm and relaxed with spread out tables, soft lighting and dim music.  Our waiter was extremely helpful in translating some of the menu and ingredients, after we tried to guess what they were, but some may forever remain a mystery. 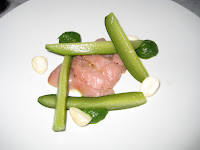 Our amuse bouche was a light pumpkin chip - salty and delicious.  We then dug in with a lovely bonito, which is smaller than tuna and really delicate and soft.  Pickled cucumber made a great companion to the fish, along with fresh hazelnut and watercress aioli. 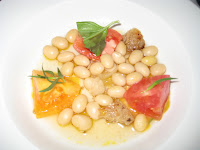 Next was a warm white bean cassoulet with bright tomatoes, basil and pieces of cooked bread - delicious. 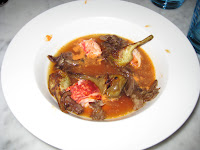 One of my extras was lobster, beef and artichoke in a light verbena sauce - fabulous. 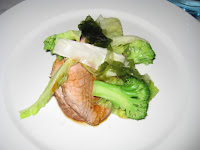 A wild duck with vegetables was nice, but seemed kind of boring after the previous plates. 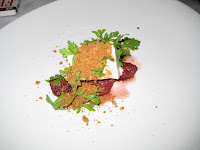 I then had another extra of figs, yogurt and chestnuts - a little odd, but fine. 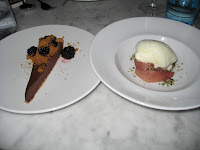 Then came not one, but 2 desserts - a nice apple dish and a chocolate tart with blackberries.

It was a very good meal in a relaxing place with good service.  I would return to see what the Swede is up to next. 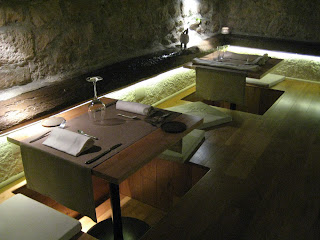 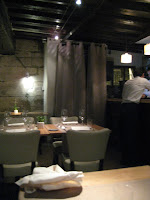 Sola was a great adventure into French Japanese cuisine.  The restaurant is very pretty with exposed stone and wood beams in the dining room upstairs.  Downstairs is a cave like den where you're asked to remove your shoes for a more authentic Japanese experience.  Like La Gazzetta, Sola had 2 options of 2 different tasting menus - 1 simply giving you more courses.  We opted for the smaller menu and were plenty full when we left.  Sake was a nice complement to our first few dishes before we moved into a bottle of Cote du Rhone. 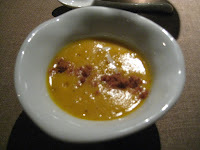 We started with a warm, velvety squash soup with mascarpone and it was perfect on this cool night. 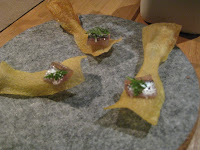 We we were then treated to an anchovy on a light chip for a burst of salt and crunch. 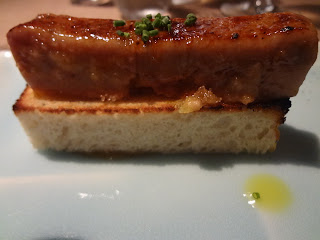 You can't go wrong with foie gras, but here's it's mixed with miso for a sweetened Japanese twist. 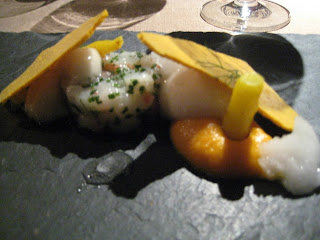 Next was this, and the sake/wine combo has kicked in by now so I don't remember everything in it, but it was a well done mix of fish and savory flavors. 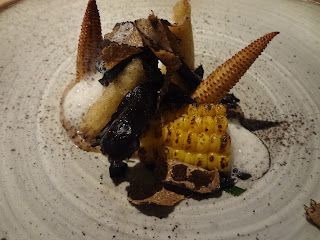 Here we have a corn tempura with chestnuts, mushrooms and the piece de resistance - truffle shavings in a truffle emulsion.  Delicious. 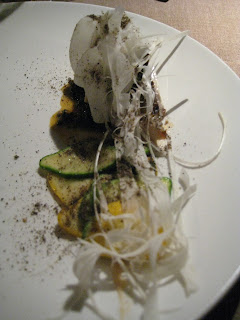 Then came a light fish with grilled yellow and green squash and a beautiful hearts of palm decorative (and edible) topping. 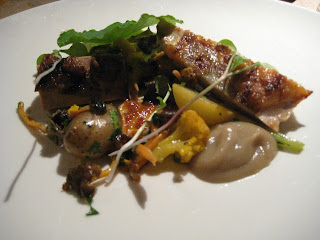 Next was this gorgeous meat, potato and vegetable explosion. 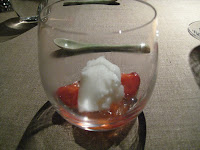 A lovely light fruit taste, before getting serious with dessert. 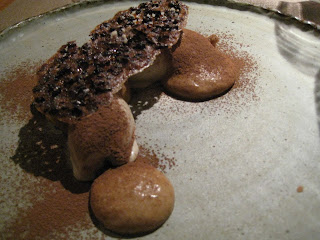 A seriously good chocolate finale.
Posted by Kelly at 10:40 AM