It's Not All Food and Wine 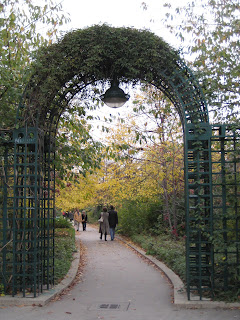 Or is it?  There are in fact times when I step away from the bistro and the bottle to enjoy Paris' many other offerings.  Seeing as Paris has quite the gastronomical culture, I've jumped in with both feet into that arena, but don't fret, I have also been taking the time to explore the many other city sights.
I recently had an art adventure in my own neighborhood.  Just down the street from me is the Opera Bastille, and behind that is an area I've been wanting to explore with interesting workshops and home stores, called Le Viaduc des Arts.  While in search of them, I found an outdoor staircase leading up behind the Opera.  It seemed like an odd location for stairs so I thought I should go investigate.  What was going on turned out to be the Promenade Plante, a beautiful, narrow garden that runs almost for 3 miles with gorgeous views of the city.  It used to be an old railway line, similar to High Line Park in NYC, and there were families, runners and sitters enjoying the day and the beautiful landscape. 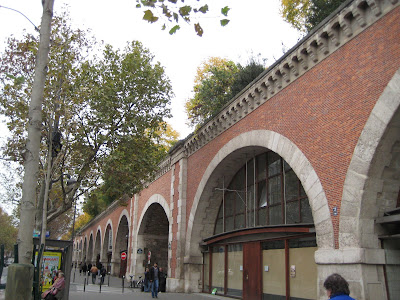 I soon learned that the Viaduc des Arts was literally right under my nose, running all underneath the Promenade.  The Viaduc shops are all huge window fronted stores that sell everything from art, to furniture to clothes and jewelry.  They're more upscale spots and sometimes the design of the store was just as pretty as the contents within. 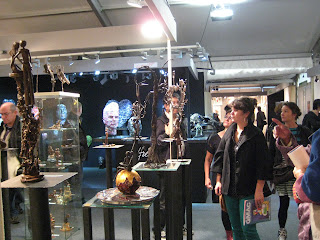 Continuing on my art and exploration week-end, I found a large modern art fair set-up in front of the Opera and continuing all along the Canal, so I went to have a look.  Normally modern art isn't really my thing, but there was a unique selection of sculptures, paintings, glass work and designs that you couldn't help but admire.  One part of the show was covered and indoors, and there was another section of art displayed to the open canal, making a feast for the eyes in every direction. 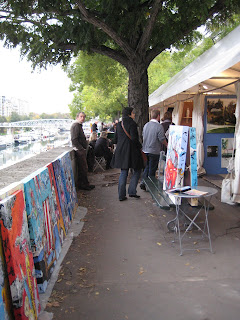 I also finally went into the beautiful 17th Century church, St. Sulpice in St. Germain that houses two Delacroix frescoes.  It is said to be one of the largest and best kept Jesuit churches.  I heard faint sounds of singing while I was there, and found a small service going on in the back of the church.  The organ is one of the only "100 stops" organs in the world, meaning it's really big, and you can even climb it and take a tour inside. 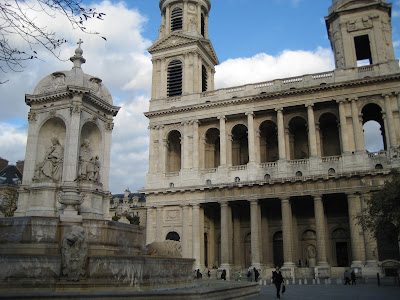 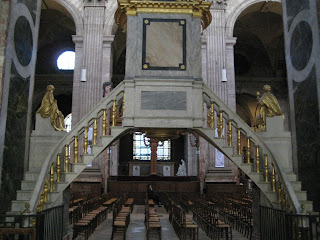 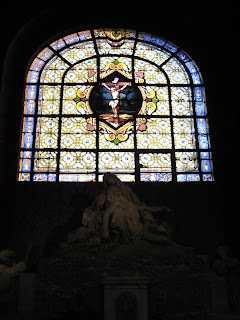 I'm continuing to do some writing for websites and blogs, and with the writing comes a lot of research to investigate the topic du jour.  I just finished a piece on destockage stores, where name shops will send their excess or last season's line to sell at a discount.  I think I lost some money on writing that piece, but I gained some deals and cute new Parisian finds. 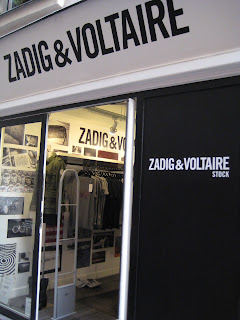 Last week I was sent on assignment to try out a new cooking class, which was right up my alley.  The class was given by a tres petite Frenchwoman who lives in a tres grande maison with a newly restored, fabulous, open kitchen.  I tried not to gasp when I saw the multiple ovens, including a special, steam oven that pushed my oven envy off the charts.  It was fun to be back in a "real" kitchen and me and 4 other French ladies made squash soup, "flan" with eggs and salmon and a lovely apple tarte tatin.  I picked up some good French cooking tips and had a fun trip back down oven lane. 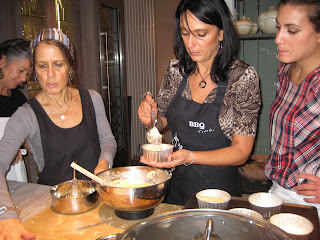 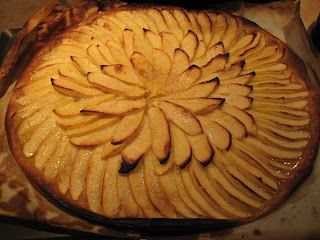 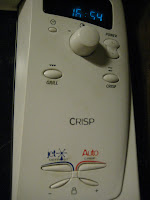 I came home and stood in my kitchen, since there's no room to walk, and stared at my microwave, wishing it would turn into something else.  Then the "Crisp" function on the outside panel that I had always ignored caught my attention.  I found a manual, a French dictionary, and I came to learn that there may be some other techniques my microwave could handle beyond reheat.  I got a sweet potato and eggplant, sliced it up, put it on a special round tray just for my device, and got as far away from the kitchen as I could in case something blew up.  But it didn't, and I ended up getting a version of some baked food, and a huge smile on my face.  My microwave and I are now best friends, and my culinary world has just increased exponentially. 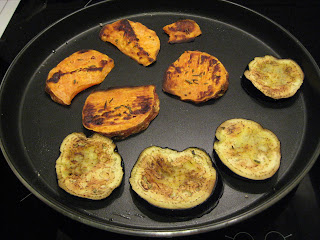 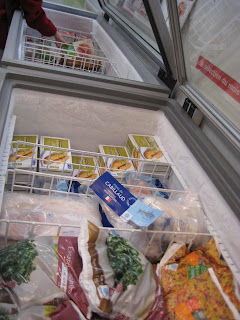 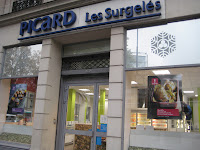 I started to think about baking fish in the "Crisper," and I was debating where to go to purchase some poisson.  I had been hearing quite a bit of talk about a place called Piccard.  I kept trying to ignore it since Piccard is a pristine, white store that sells nothing but frozen food.  Surely that should be illegal in farm, fresh, foodie France?  After having dined with a wonderful, older Parisian woman, who told me she only buys her fish there, I decided it was time to check it out.  Piccard has everything from frozen vegetables to steak tartare to shrimp, soup, desserts and even croissants.  I stayed focused on fish and some hard to get greens, and also because my freezer is tiny so I had to limit myself to 2 purchases.  I tried out my Piccard Frozen Cabillaud tonight and it wasn't half bad, and it's half the price of most fish at the markets, and equally as tasty. 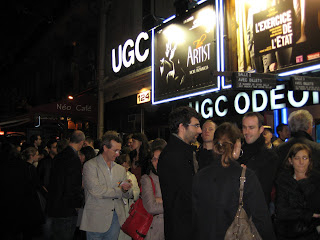 I went to my first movie in Paris this month.  Those that know me, know I pretty much just go to the movies for the popcorn and there's an art to making the corn with butter at the halfway point of the bag and on top for perfect bites all the way through.  After a long queuing process outside the theatre, everyone files in and no one gets any concessions, which is just as well since the stand looked like it could only accommodate about 4 people per night.  When you order popcorn here, they ask you if you want "salty," or "sweet."  I stood waiting to hear the 3rd option of butter and you can imagine my shock when I learned that this was not an option.  Seriously Paris, you put butter on your butter, and you can't put it on my popcorn?  The salty was fine, but not fresh popped.  Next time, I'll try the mix of half salty and half sweet. 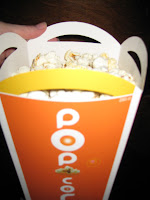 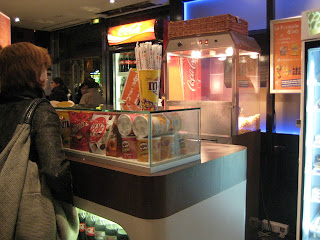 I'm not the only popcorn crazed person in Paris.  I went to a party recently and there was fresh popped microwave popcorn in a bowl that was inhaled by me and other ex-Pats, while the brie, pates and desserts sat untouched.  The focus of the party was actually beer, however.  3 people had gone to an eccentric Frenchman's garage where he teaches and allows people to make their own beer, so I had the good fortune of being at the tasting party.  There was a nicely flavored Belgium beer, a little too hoppy blonde/IPA, and a heavy Guiness like beer with notes of chocolate.  Good beer and fun time. 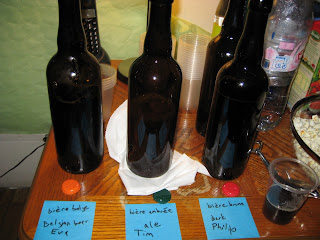 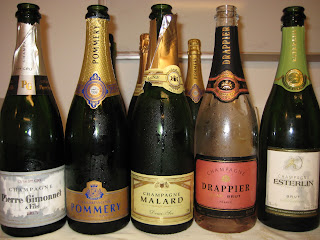 I realized I've slipped in some food and beer talk, so I might as well talk about my last Cordon Bleu Wine Class.  It was the finale and we were to drink 5 different champagnes, but luckily or not, we took our test first, which included a blind tasting.  A covered bottle was poured for us and we had to name the grape, appellation, year, when to drink it and a good pairing.  Yes, it was a little more difficult than I anticipated, but I did get the appellation right and was only a year off on the vintage, so fingers crossed I got enough right on the rest of the test to pass.

I'm barely still enrolled in any sort of French learning, outside of my daily excursions with the natives all around.  Schedules got a little out of whack and my last pub conversation class had me attempting to explain the US tax system in French, which wasn't something I even wanted to do in English, so I left a bit deflated, though glad I wasn't living in Germany with their taxes!  I will be making a renewed effort next year, and am coasting through the holidays this year.

I just finished a fun 5 days with my sister in law in Paris, so more updates to come!
Posted by Kelly at 8:24 AM