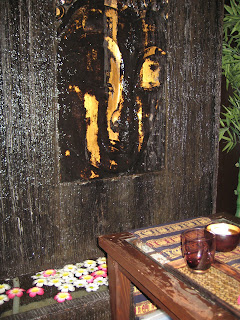 Holiday Week Continued with my actual birthday on Tuesday.  I woke up to a fabulously mild day in Paris with warm, clear, blue skies.  I was a bit unsure how to celebrate my actual bday since every day here has been a fabulous gift.  Luckily a resourceful friend recommended I get a Thai massage from one of the native trained Thai women at their beautiful oasis in Paris, so off I went.  I arrived and was asked to take off my shoes as soon as I got there.  Hopefully this is something they ask of everyone, and not a comment on the state of my American footwear.  They returned with a warm wash wash cloth and I was already relaxed just sitting in the front room looking at the Thai statues and listening to the trickling water.
I was walked upstairs to a large room of mattresses on the floor, swathed in Thai silks and flowers that had colorful curtains that came down to give you full privacy. 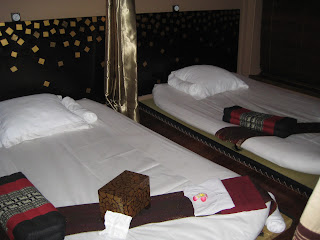 I changed into baggy Thai pants and a loose top and the next 90 minutes were pure bliss, even if there were elbows, feet and knees used for the full body rub down.  There was French and English going on, but I think everyone speaks massage, so it all went very well.
Walking around Paris in a haze afterwards, I was debating where to eat for lunch, and found myself on auto pilot going to my favorite little Mexican joint, Candelaria. Guac says happy bday in any language. 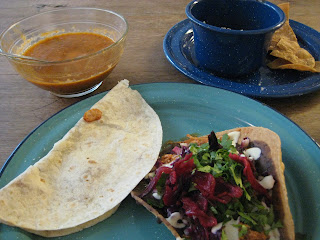 Having covered Thai and Mexican, I was ready to dive back into my host country and I decided to go to a museum in my neighborhood that I've passed dozens of times with every intention of visiting, but never got around to.  Musee Carnavalet focuses on the history of Paris and its people, but what I find especially interesting about it is that the collection is displayed throughout 2 townhouses where you wander from small room to room, giving it a more intimate feel.
I loved this room of signs. Some are quite elaborate since some of the shopkeepers were illiterate, so they made very expressive signs to show what they were selling. 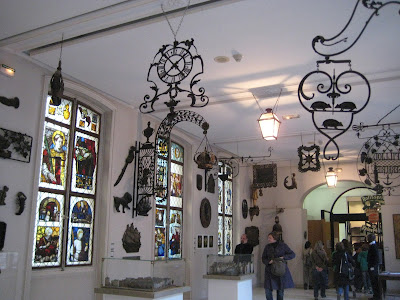 You may recognize this one as it's now on many posters, "Chat Noir Cabaret," celebrating the artistic haven of Montmartre. 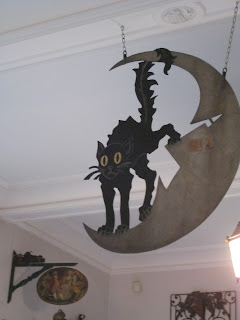 The over 100 galleries within the townhouses showcased several different centuries, including the storming of the Bastille, which was of special interest to me since I live right next to the Bastille, so I got to see some replicas of the Bastille and paintings of how things used to look. 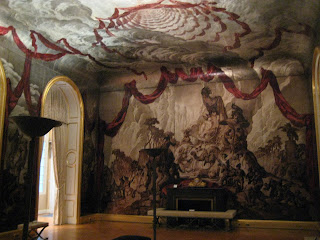 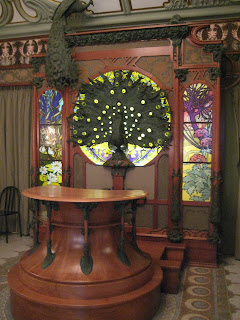 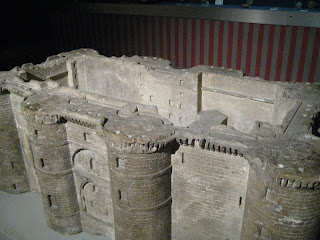 The day was capped by a fabulous meal at a local French bistro with a friend called Les Temps des Cerises.  Again, it was another place I had passed a bunch of times down the street from me, but I finally had a chance to eat there, and loved the neighborhood feel.  My duck was fantastic, and the pear crumble was better than any sugary frosting laden cake! 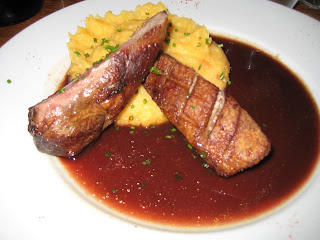 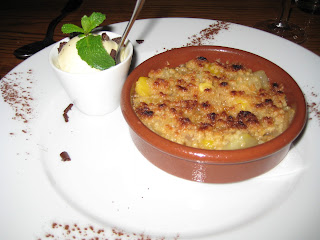 My wonderful friends from home continue to introduce me to people they know in Paris, and I've had the good fortune of having 2 all male lunches in the past week.  My first lunch was with Jean-Francois, Jean-Michel and Stephane, and my lunch this week was with Jean-Charles and Stephan.  Those are 5 different people, not related, except by French heritage and an apparent lack of creativity from their parents on their names.  If I ever forgot a name, I'd just say Jean something or Stephan.  I met the first 3 near the Palais and they were all impeccably dressed in suits and fabulous shoes, and that's a refreshing change from the board shorts and flip flops I'm used in in LA.  I laughed when they asked if I drink wine.  I didn't think I'd get past Paris Passport control if my answer to that was no.  Drinking during the workday is not a big deal, and one of them said he pretty much needs to drink for his job since he's always entertaining clients.  They all worked in Finance so we had some interesting conversation around the current state of affairs, and then I came to learn that 2 of them are war re-enactors.  They travel several times a year recreating any battle with Napoleon in it.  I may have gotten a little street cred for having studied at Gettysburg, though I never attended one of the many re-enactments, but it looks like a French one is in my future soon. 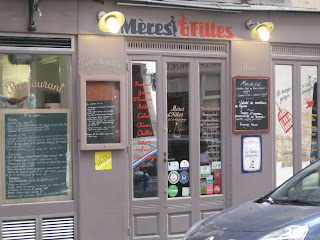 My lunch this week was with a more casual bunch, but very entertaining - literally.  The 2 are hockey commentators and one of them has commentated on gymnastics for the Olympics for the last 8 games, so you may know him already.  Stephan lives and works down the street from me so I got some good restaurant recommendations, including the spot where we had a really nice, locals lunch.  He knew the people working there quite well and walking down the street, he was also stopping cars, and shaking hands.  I think I met the mayor of the Marais, and I may be going to my first Parisian ice hockey game next week. 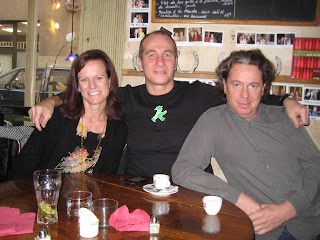 My big coup was not drinking or taking dessert at lunch.  I'm honestly trying to find a place to cut back and you would think lunch would be easy enough, but I have been "hugely" unsuccessful.  I did drink at the other men's lunch, but didn't take dessert, and they all looked at me as if I said all Parisians are rude (believe me, they're not), and then taunted me with theirs, and yes, then I had to take a bite.  I don't know how there's so many thin Parisians here.
After lunch, I passed by the store, Thanksgiving, which sells American goods at prices that should include a plane ticket home.  The store had a line going out the door the day before Thanksgiving to buy that last minute can of $12 cranberry sauce, and $15 box of Mac and Cheese just in case everything goes awry. 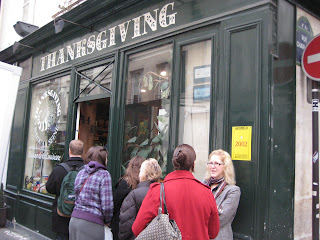 Tonight was the cap to my Thanksgiving week with a "traditional" US Thanksgiving meal in a restaurant.  I had the home cooked pre-Thanksgiving meal on Sunday to cover my stuffing and pumpkin pie fix, just in case this meal turned out to be an all foie gras - escargot extravaganza.  I know the French can't help themselves, but after arriving at the restaurant, I learned that the couple running the place were American, so I breathed a sigh of relief, and was happy I was in a flowing dress with no restrictive buttons or zippers. 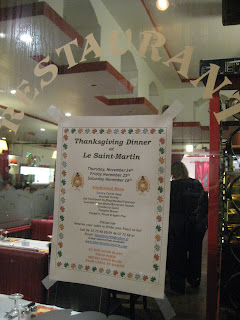 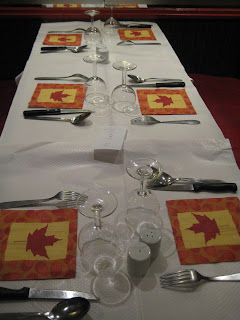 6 of us ex-Pats from all across the US showed up ready and hopefully for some flavors from home.  We recounted our favorite dishes and memories of Thanksgiving, some of which included rice with Turkey, and no stuffing - sacrilege, but not so with a Latin American background.  There was potato gun shooting and turkey smoking, but the common thread was friendly people having a nice meal, and that's just what we did tonight. 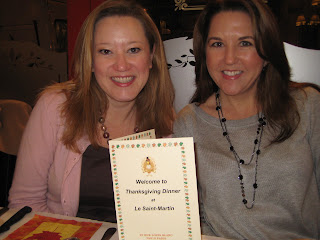 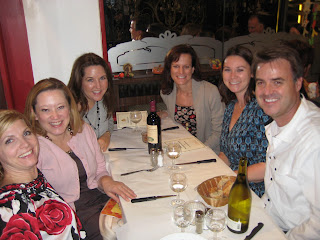 We started with a warm carrot soup that was rich and velvety, and thank goodness explained why there were croutons on the table. 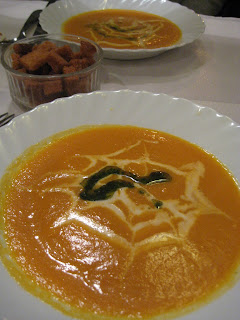 We got all the goods on our Thanksgiving plate of turkey, stuffing, mashed potatoes, cranberries, green beans, butternut squash, with a drizzle of gravy.  Yes, I wish it were more than a drizzle, but the food was good enough to stand on its own without gravy soup. 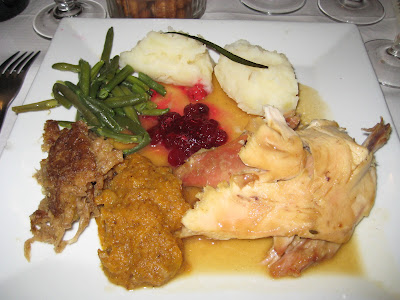 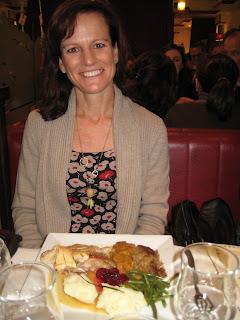 We were asked for dessert if we wanted apple, pumpkin or pecan pie.  I was a little puzzled as I assumed we got a small sliver of each like back home. 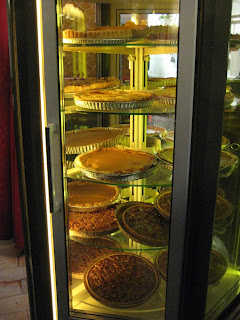 I think they were on to me with my forgiving waistband, which I now applaud them for.  I went pecan pie, and I was not disappointed.  It was sweet and decadent and the perfect ending to this US Thanksgiving meal in Paris...or almost. 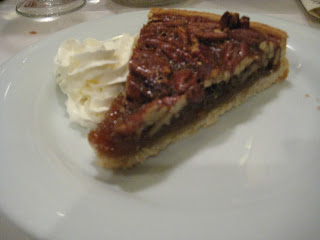 We had to have a nightcap drink down the street, and then I had a nice, long walk home to digest all of the food and reflect on how thankful I am to be living in Paris and be supported by the friends and family I have now on both sides of the pond.

Happy Thanksgiving all!
Posted by Kelly at 2:03 PM