A Feverish Week with BACON bonuses

I was in denial that I was sick this past week.  I originally thought I was going through some sort of pork and carb withdrawal after returning from the Alsatian Christmas Markets.  When the sweating while seated continued each night, along with an overall body ache, I thought, huh, maybe I’m sick.  I tried to take it easy, but living in such a small place, I was going stir crazy spending more than 24 hours straight here, so here’s what my abridged week looked like.


Saying that this is not an easy reservation to get would be an understatement, but showing up and writing your name in the book a month in advance turns out to be easier than trying to call at the right time on the right day with the person in the right mood. 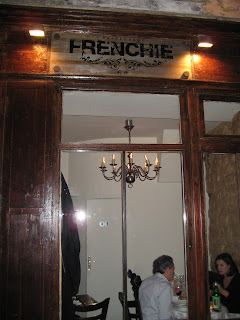 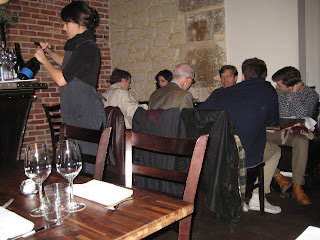 I do understand how they never have any tables available because there’s only about 10 of them.  It’s a petite little spot down a random, unmarked alley, with exposed stone on the walls and a little open window to the kitchen for order pick-up.  They only serve one 3 course prix fixe menu a night with just 2-3 choices.  The 3 of us each got one of the 3 starters offered.  There was foie gras that you can never go wrong with, scallops with green apples and pomegranate, and an open faced mushroom ravioli, which I could eat every day until Christmas, and after, I’d just take the sauce and do shots.  Won-der-ful! 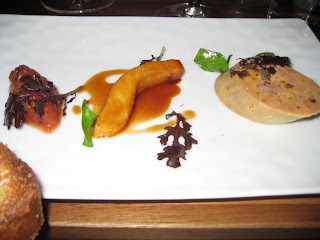 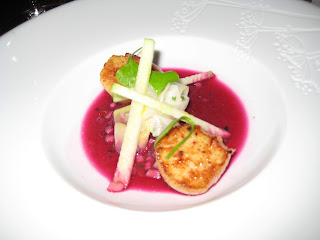 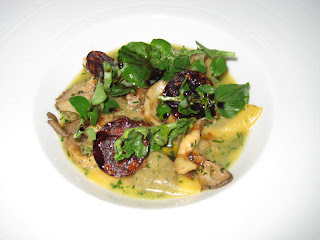 For the main, we all had a red trout with baby bok choy, spinach, and fingerling potatoes that was perfectly cooked and warming to the soul.  There was a duck dish also available that night, but after the carb-a-pig-a-palooza week-end, we needed some lighter fare. 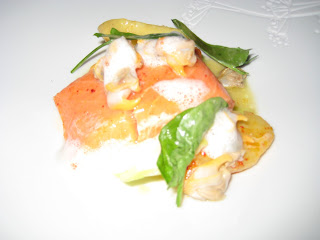 We also split the 3 desserts - super rich chocolate tart with bacon sprinkles and creme fraiche (yes you read that right - bacon sprinkles!), a lemon and butternut squash mousse, and a poached pear with stilton and nuts.  Clearly, the chocolate tart was the winner, but the mousse was a sleeper hit - light and refreshing with an unusual, but pleasing flavor. 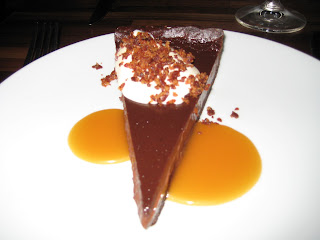 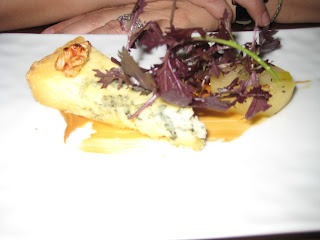 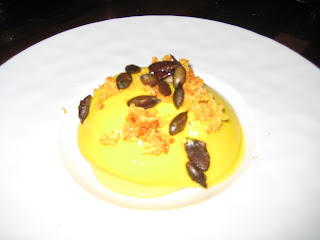 I’m now a full-on Frenchie fan, even despite their resistance to make the reservation process easy.  I love their wine bar across the street that is serving food from the same kitchen, and their restaurant is tops without overly fussy fare, and really solid cooking.


There was a day of recovery and sweat after Frenchie, and before Reuan Thai.  I was anxious to try out some good ethnic food in France, if it was possible.  This dinner group was being hosted by the Candanian who cooked my pre-Thanksgiving meal, so I knew I’d be in good hands.  Eight of us met in the  11th and this long standing Thai restaurant and we were at a perfect large round table in the back with lazy susan ready to rip. 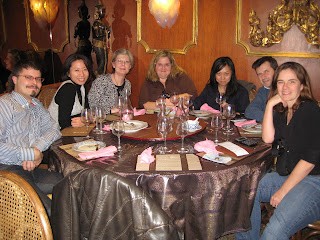 There was a collection of interesting salads of different textures with fish and vegetables and a tangy sauce. The fish cakes were a little fishy, and the fried egg rolls, well, were fried so they were good with a nice sweet dipping sauce. 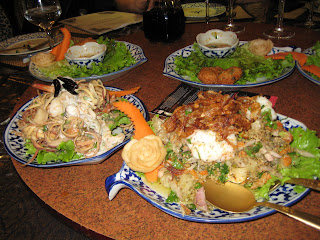 There was white rice, sticky rice, curries - the red curry with chicken was the winner.  The pad thai was delivered as a little egg wrapped gift with some assembly required for mixing in sugar, spices and vegetables for your perfect taste, and perfect it was.  The whole fried fish was also delicious. 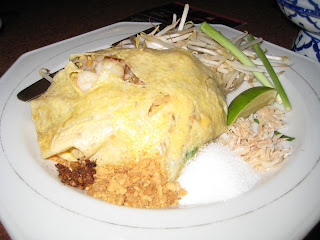 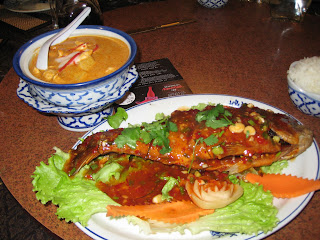 It didn't seem possible, but yes, there was room for dessert on the lazy susan, who wasn't being so lazy after the previous 2 hours.  We had a tapioca, slimy banana concoction that wasn't as bad as it looks, but I won't be ordering it again.  There was a deep fried pineapple, which again, you can't go wrong with the deep fried, but not sure the pineapple was the best treat for the inside.  The warm sweet, sticky rice with nicely ripe mango was my favorite, and the perfect note to end on, before I had to remember that I was sick again. 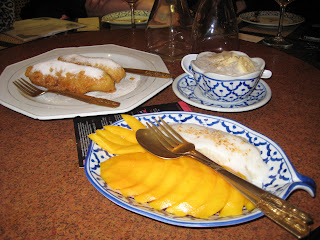 After another day of rest, I was sure I was better and ready for the week-end.  It started with a lovely ladies lunch at La Gazzetta.  I had enjoyed a very good dinner here a few months back, but was thrilled with the great prix fix lunch that I will definitely be revisiting. 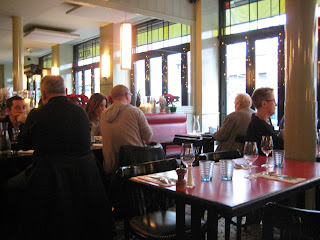 The menu most of us ordered came with a collection of 3 of the cutest, tastiest little starters:  a creamy pumpkin soup, a slice of cheese, onion, ham pizza and a cold, salty sardine salad. 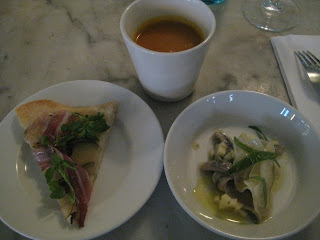 I then had a warm dourade served with a perfectly cooked and sweetened, grilled eggplant.  All of this for under 20 euro was quite the deal, and quite the meal. 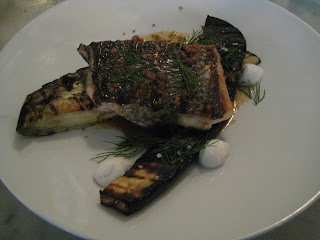 After lunch, we boarded a bus to go see the Cezanne exhibit at the Musee du Luxembourg – 2 firsts for me, taking the bus and going to this museum on the edge of the gardens.  The exhibit was small, but good. Cezanne spent most of his time in the South of France, but he did travel quite a bit to Paris to paint, and some of those works were housed here, including his evolution from student painting nature to nudes to still life’s and portraits.  There was many Cezanne lovers there, packing the place on a Friday afternoon. 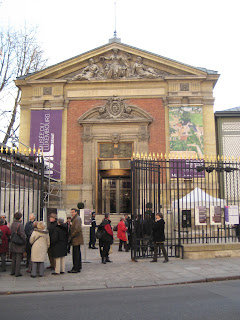 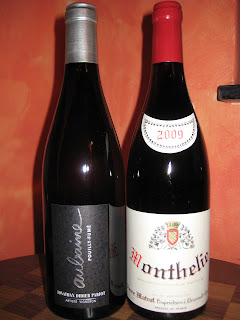 After a quick break, I got on the old Velib and headed to the monthly wine club pick-up at Spring.  Our selection this time included a Pouilly Fume Aubaine from Domain Jonathan Pabiot in Pouilly-sur-Loire.  The Domaine is a family run operation for several generations, and just became a fully certified biologique winery.  The grape used in this bottle was Sauvignon Blanc, which gave it a perfumy, floralness, which wasn't my favorite, but of course still drinkable.

I enjoyed the Monthelie red better from Domaine Matrot in Burgundy.  It's not one of the big shot names, but that also means you don't need to pay the big shot prices to still also receive quality wine from a prestigious area.  This family has been making wine for 5 generations and is more known for their whites from Meursault and Puligny, but if there whites are half as good as their reds, then I'm ready to try the whole line.

Afterwards we checked out a wine bar and restaurant called Les Fines Gueules.  They change their wine and food menu each week based on the latest in the fields. To make it easy, they keep their menus on chalkboards and bring each over to you when you’re ready to order. 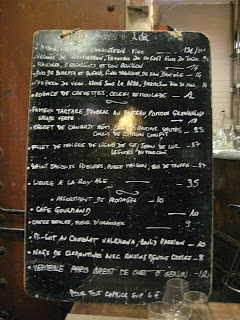 It’s a concise list, but once I saw foie gras ravioli, I knew I didn’t have to look any further.  Unfortunately my excitement was quickly dashed once the overcooked escargot in the bland broth arrived.  Luckily mes amis shared their cheese and charcuterie platters and I was quickly revived. 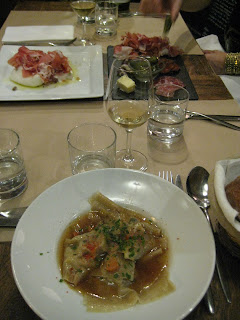 I had another appetizer for my main of shrimp on a dressed bed of grated celery.  This cold dish had more zip to it and I looked to be happier than some of my scallop ordering friends who thought they were a bit overcooked. 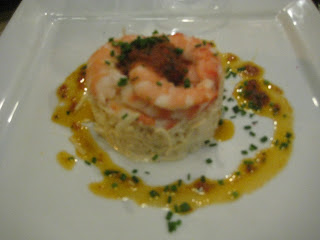 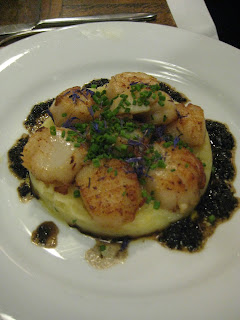 The place was bustling on Friday night and I might return here for a seat at the bar and some charcute with a nice glass of wine from their unique and reasonably priced wine list. 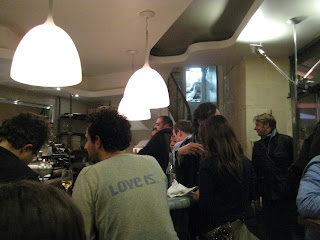 By the end of the meal I was not feeling well, and it wasn’t just because my dinner wasn’t the best, so Saturday was a day of rest and reading, which actually wasn’t too bad.  The rain had begun, and I was happy to be indoors, but by Sunday, I was ready for more Paris.

I wandered down in the drizzle to the Village at St. Paul, which is a great collection of artist studios in the neighborhood.  There was a food fare held in the open spaces between their ateliers this week-end.  I bought some nut oil that is now adding a lively twist to my salads. 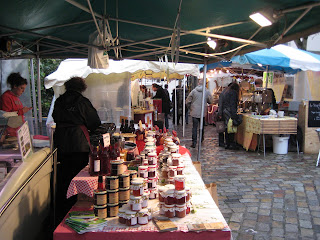 The week-end finale was a visit to the first “real” food truck in Paris.  The owner was a woman from LA who had trained at a French cooking school in Paris and is now doing a burger truck here. Her location changes daily and you have to be “socially” in the know by checking facebook or twitter to find out where the burgers are being flipped and when. 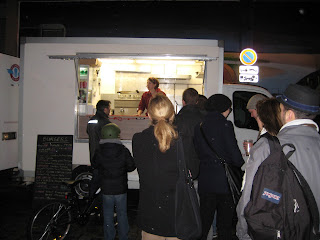 She has 5 burgers on her menu and I had the barbeque, which was full of bonuses like a deep fried onion ring in the middle of the sandwich, as well as real live bacon, which they don’t serve in Paris, except on Frenchie’s desserts of course. 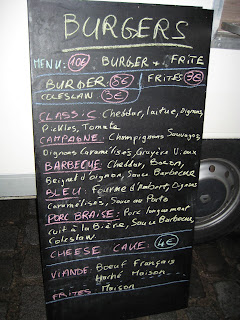 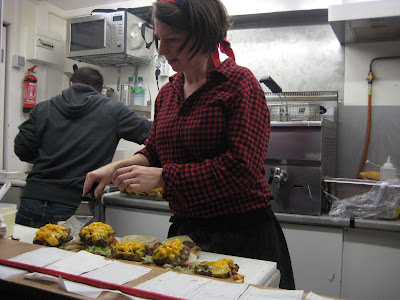 My burger was everything I wanted it to be, but something I wasn’t sure could be pulled off in Paris, because my burgers to date have very much been lacking in real beef flavor.  She does use French meat, bread and cheese so no Parisians should be hatin’ on her.  In fact, many of them were lined up alongside of us, or actually trying to push to the front as they’re not known to queue well.

The frites were thick cut and very good with the side of ketchup.  I’ll be back to try her pork sandwich and mac and cheese when it’s ready.  She’s off to a great start, and has propelled me to finally feeling 100%. Looking forward to getting back to a full schedule! 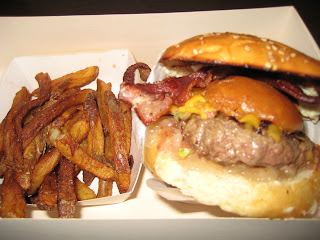