I can’t believe my time in Paris for 2011 is already coming to a close.  While I am planning on coming back next year, that hasn’t stopped me from trying to cram in as much as I can into this final week. 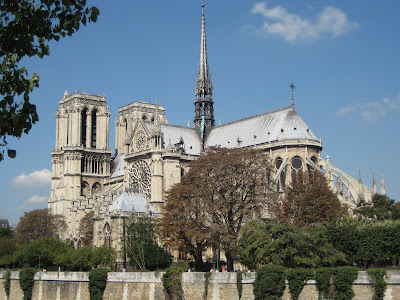 Monday I gathered with the 2 Jean-x’s and 1 of the Stephane’s for a farewell lunch and a final glimpse for me on how men should dress and what they should put on their feet.  They did not disappoint on this day.  The treats didn’t stop there.  When asked if they wanted an appertif, all 3 heartily agreed.  Need I remind you it was MONDAY at lunch, and they were all going back to work, and Stephane was also fighting off a cold.  I’m sure I don’t even need to tell you that there was also a bottle of wine ordered with lunch.  I must also remark on how the French are a whiz with the fork and knife.  3 of us got a special chicken dish which was comprised of small parts of the chicken with the bone in.  I was doing my best not to fling the wing off the table with my utensils, and I look over to the other 2 and their bones are licked clean, and I know they didn’t pick anything up with their hands.  They have superior knife skills.  And of course all 3 had frilly whipped cream desserts at the end and then we bid adieu until next year when there were threats of a French only speaking lunch.  Better do some studying over the holidays. 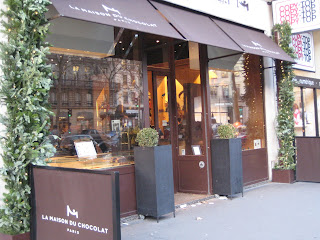 After running errands that same day and passing right by Maison du Chocolate, I had to reward myself for not having dessert at lunch with a macaroon the size of my head.  Ironically I had that in one hand, and then went to buy a scale with the other, but not for weighing myself (we won’t be doing that for a loooong time), rather, for weighing my suitcase to make sure my nearly fake Air Tahiti airlines will take it to LA with me next week. 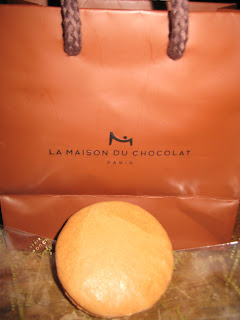 I’ve spent a good portion of the week sorting, tossing and packing for the trip home.  Since I’m returning to the same apartment, it should be easier, but then I need to decide what stays and what I’ll need at home, and what won’t be coming back.  I’m actually pretty pleased with the pack job I did here, but there will be some items not returning, to make room for some more sweaters to get me through the winter.
This may come as a shock, but I’ve accumulated some wine since my arrival.  I’ve been looking into methods to get it home, and honestly the easiest and cheapest is in my stomach, but seeing as I would like to share a few bottles with people, I’ve been trying to see what my options are.  Here’s what you can pack in your suitcase:  ice pick, axe, saber, sword, bow and arrow, spear gun, flare gun (but no flares), cattle prod, throwing stars, and stun guns.  You know how much wine I can pack?  2 litters.  2 litters is what the 3 well dressed/shoed French men had while reviewing what bottle to get with lunch.  You would think that if I actually agreed to keep my cattle prod and sword at home, they would allow me to bring another bottle or two.  Wish me luck. 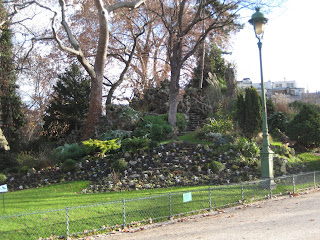 Wednesday, I had lunch with a new friend of a friend from home.  Yes, I still have some on the list, and she was just delightful, and a near Parisian after having been here for over a decade and a half.  She also brought me to a new neighborhood, which I wandered, including the beautiful Park Monceau.  We had talked about the Diane Arbus exhibit at lunch, so I found myself checking it out later that day.  Diane had some demons and some very specific subjects she liked to shoot like twins, nudists, mentally disable people, transvestites, and the list goes on.  It was an interesting exhibit of her work, as well as a good look at her life, and I’m glad I went. 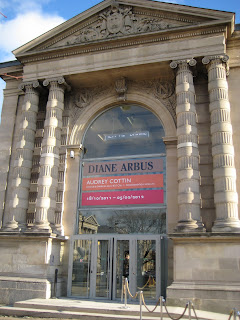 I may have had to reward myself with another giant macaroon, because the one I had the day before was chocolate, instead of caramel, and well, I simply needed a farewell caramel macaroon before leaving.  Mission accomplished. 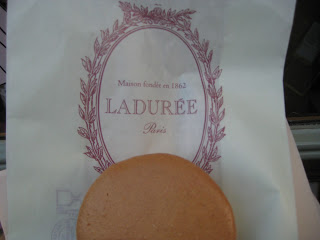 Wednesday night, it was time for a drink.  I met Stephanie and Lisette and a British group for a champagne tasting of 6 different varietals that turned into 7 or 8, and maybe even 9.  The group ranged from interested in the information the teacher had to share, to just thirsty and wanting more boozy bubbles in their glass. 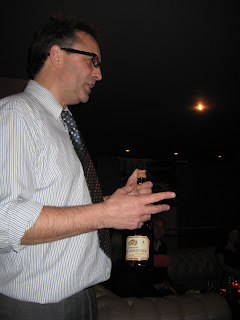 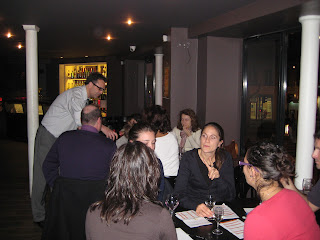 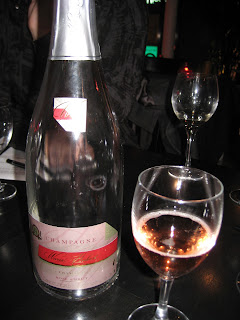 We did get a nice range of blends from Chardonnay and Pinot Noir to all Chardonnay, and even a really smooth Grand Cru Blancs de Blancs, all from independent vignerons who grow and make everything themselves. 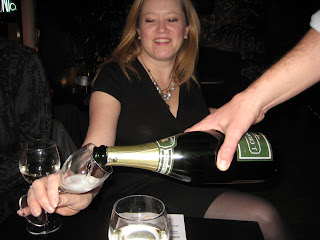 At the end there was a contest to guess the last bottle, and of course my table got it right, which gave us even more champagne.  Somehow I ended up with a martini on the table in front of me when it was all over. I get excited when I see martinis on a menu so I thought I should try it in the name of research.  It was ok and at least drinkable, but here’s what I saw on the bar when I was leaving, so I’m thinking my ol pal Martini Rosso was present. 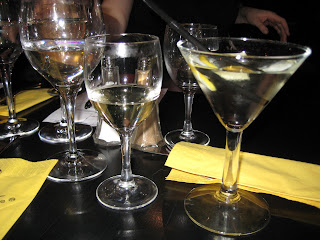 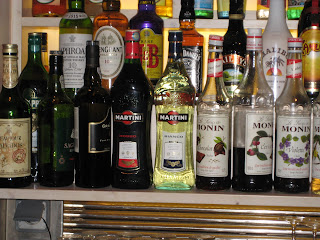 The final week-end is ahead, and then I'm home next week!