As promised, the weather did warm up to the 40s this week, but intermittent wet weather came with it.  It feels practically summerlike with the 20 degree temperature increase.  It’s actually perfect walking weather and I’ve taken to the streets the past few days. 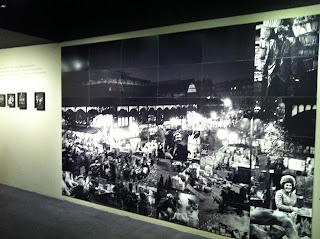 Monday I went to the Doisneau exhibit with my neighbor Beth, who looks to be a neighbor no more as she’s semi-permanently moving to Germany.  Most people probably know Robert Doisneau for his black and white Parisian photos including the infamous couple kissing on a city street, amongst many others that you can find on postcards around town.  His collection currently on display at Hotel de Ville focuses on shots he took over 30 years of the once bustling food mecca, Les Halles.  The pictures exuded life and energy around the day to day happenings in the active food stalls.  You can see the mass amount of people, transportation and commerce that once went through the lively area.  Unfortunately with that activity, also came some less picturesque action like drugs, prostitution and crime, which Doisneau wasn’t quite as keen to cover.  It was more of an homage to what once was.  Les Halles was closed in ’69 and 10 years later it was replaced by a wretched underground mall and metro that is now again under construction for an ultra-modern facility that screams more George Jetson than classic Paris.
I also went to an art exhibit in a friend's home this week.  He got his visa here by starting a business where he paints a new piece every day, and he's married to a wonderful chef, making for a nice evening of art, snacks and champagne. 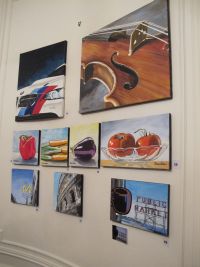 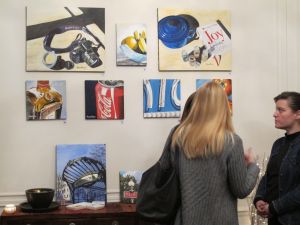 Tuesday brought a new Parisian experience when the “handyman” came over to fix some odds and ends in the place.  I’ve never quite seen a fix-it guy like this one.  He spoke near perfect English and was impeccably dressed; collared shirt, sweater, pressed pants, belt and leather, buckled, wing tip shoes.  All he brought with him was a clear plastic bag with a few cleaning products in it, though I will say he diagnosed one toilet issue quickly, but he has to come back with a new part.  He also believes that he can reset the bathroom fan that runs for 45 minutes after you turn it off, but he didn’t have the right tool in his plastic bag.  He was very polite and eloquent, and said that he’d be back by the end of the week.  Seeing as the week has ended, I wish I would have asked him which week he meant.  Hopefully he’ll return sometime before the end of the year.
In other news of the domestic, I attempted to open a bank account here this week.  The Parisians are teaching me patience and to have really low expectations of things.  I knew I wouldn’t get an account open on the first try, or even the second.  I knew there would be multiple visits, and that at the end of all of that, I may still not have an account.  So I went in this week thinking I had a 50/50 shot of getting an account.
My first visit with every paper I could round up with my name on it and Paris beneath, was a quick one, and perhaps more of a passing through introduction.  They could set up an appointment for me for the next day, but not today, even though I looked at people sitting alone at desks.  Of course though, tomorrow it is.
I came back the next day, more papers in hand, and also apprehensive to see if there would be any English spoken.  The woman I met with did end up speaking decent English and she couldn’t have been nicer.  We were cracking jokes with each other by the end.  I signed many, many forms and gave her more information about myself than I think most of my family knows.  I had a small moment of panic after signing a form and talking about Interest, taxes and declaring it to the government.  I always feel like I’m doing something illegal or incorrect here.  I remember having a similar wave of nausea when signing all of my loan documents when I was buying my condo, but then I realized all I want is an ATM card to avoid major fees, and to be able to pay for train tickets, which require a chip in the back of the card and the US cards don’t have this.  It appears a chipped card and new international checkbook will be mine come next Thursday, but again, I’m prepared to go next week and receive a different outcome.
I checked out a few good new restaurants this week.  Stephanie and I tried Le Rouge et Le Verre for lunch.  It’s a local spot in the 9th that is part wine store, part restaurant, as is becoming quite the rage in Paris.  They had a great 17 euro lunch menu and inexpensive, but good wines by the glass.  I had a wonderful “Parmentier de canard gratine,” with perfectly cooked duck under a blanket of mashed potatoes.  The charcuterie and fromage were also excellent. 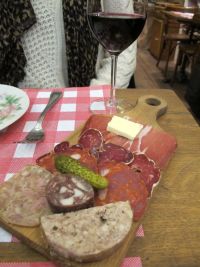 I also had an excellent dinner this week with my college friend Jen at La Cantine du Troquet Dupleix in the 7th.  It’s a new spot and worthy of a return visit. 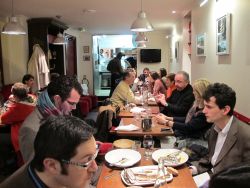 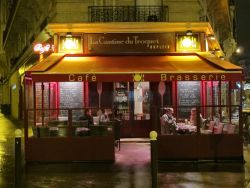 We were placing our order when a friendly Frenchman next to us told us how good (and rare) the couteau was, razor clams, and that he had come to this place specifically because they had this item on the menu.  Ironically, I had just eaten couteau the week before, and thought it was fine, but who am I to disagree with a Frenchman.  No one has time for that kind of debate.  Well he was right.
They were fantastic, served in a garlic, tomato, olive sauce that was a happy companion to the great, crusty bread.  Jen’s aubergine terrine was also lovely, but of course needed a little kick, which we did get when the Frenchmen shared his Piment D’Espelette, a wonder spice with peppers and punch.   I had a nice, smoky sausage called Xistora for dinner and Jen had a really nice Cabillaud.  Great meal.
I went to an interesting panel discussion this week called, “What’s Eating Paris?”  On the panel was my new friend David Lebovitz, along with the writer of Paris blog Lost in Cheeseland, the Yelp Paris community Manager, and journalist and food writer, Ann Mah.  It was an interesting conversation about blogs, websites, readership, discovering restaurants, and the differences between French and American attitudes towards food.  Good “food for thought.”
I reviewed Les Affriches on Girl’s Guide this week, here.
I hope everyone is having a great week-end!
Posted by Kelly at 5:43 AM