Berries, Bunnies and Going Topless to Get My French Visa

Easter week-end found many Parisians fleeing the city for a long week-end, and the tourists taking their place.  Luckily, it has also brought beautiful flowers that are now sprouting up everywhere. 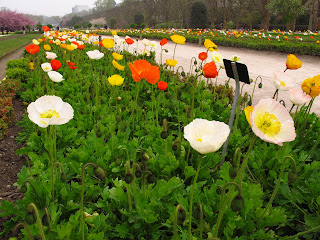 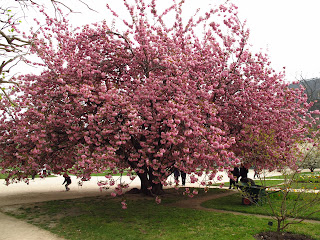 Spring is also bringing with it new fruit. The first crop of my new favorite strawberry has arrived, Les Gariguettes.  They're from the South of France, and I think I paid for their 1st class transportation to Paris as a basket was nearly $10, but mmmm, so good.  I've been told they will get even better, and cheaper.  Can't wait. 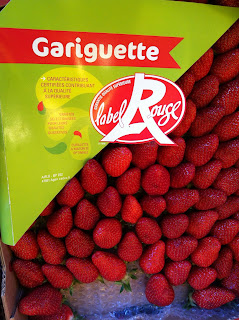 I've also been learning a lot about the 5th arrondissement, or the Latin Quarter, as I'm writing a walking tour of the area for Girl's Guide to Paris.  I've learned that some Parisians ain't afraid of a little poison to help unravel some of their tangled love affairs.  Reason #752 not to get involved in any complex webs from forward approaching, mysterious Frenchmen.  The other big lesson was if I'm going to attempt to translate Socrates, get some expert help so as not to end up like a former Parisian student who was executed for including an extra word.  Yes, this word led to a meaning that there's no life after death, but it was a simple misunderstanding that led to an early demise and public execution on beautiful Place Maubert, home to much great food.

I've seen more churches this week than the Pope prepping for Easter. 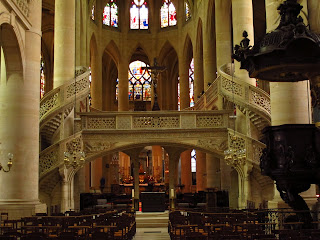 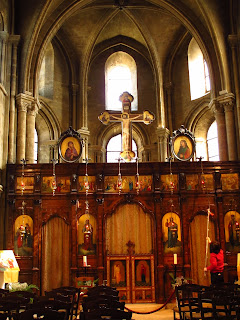 Speaking of Easter, the Parisian windows are flush with edible displays in their windows that almost look too good to eat. 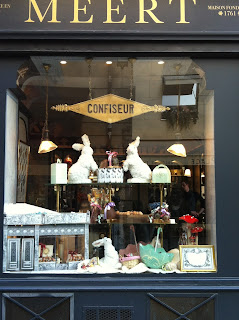 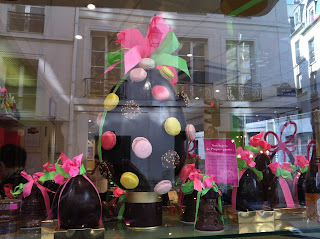 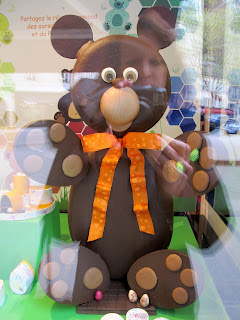 My friend Stephanie and I decided to go to Easter mass at Notre Dame....along with a few thousand other tourists, and a handful of locals. 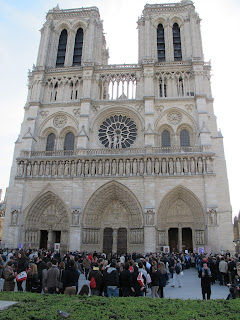 Getting into the church was a cross between Black Friday at Target and the mosh pit of a punk rock concert, and yes, everyone pushing so they can be good Catholics. 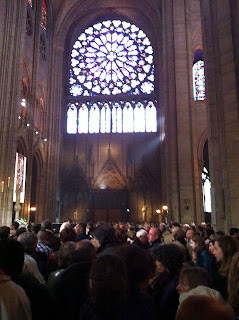 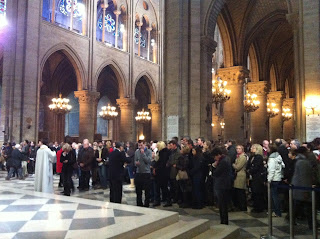 The priest spoke French and threw a little Franglish in at a few points.  There was a lovely adult choir singing with the organ.  Their voices echoed throughout the cavernous church. 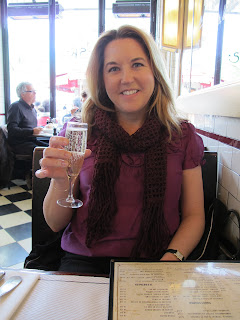 Afterwards, Stephanie and I celebrated with a traditional Easter brunch of ham and potatoes...that may have taken the form of a BLT with fries.  And of course everything goes with champagne. 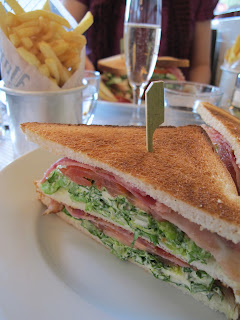 And lastly, I had my follow-up appointment with the local Paris prefecture to ideally complete my Visa process.  Sounds easy enough, no?  You be the judge.

I received a letter in the mail with my appointment date enclosed.  It was to take place while I was in Morocco.  I went to the office with my best French in hand, and tried to change the date.  It was explained to me (en Francais bien sur) that I would need to let the date pass, and then get a new date. No, they did not want to know that I wouldn't be showing up for my scheduled appointment.  OK.  I returned after my trip, and got a new appointment, and showed up exactly a half hour early as I was told would be a better way to get in and out quickly.  I guess everyone had been told the same thing as there was about 30 people crammed into a small, hot room in this non-descript building. 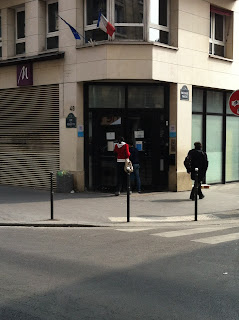 About 15 minutes later, approximately 25 names were called, including mine, and then we moved about 20 feet to another room that was freezing cold.  One by one we were called into a room for the medical portion of the visit.  I was weighed, height measured (so they can track me with a tape measure if I do something wrong ??), asked some random questions about pregnancy and a few other things I wasn't entirely sure of, but the woman shook her head yes to one of the questions I hesitated on, so yes it was, but don't worry, not to the pregnancy.  There was an eye test that my left eye did not do well on.  I hoped Paris wouldn't mind if I only saw out of one eye.

I was then instructed to stand in a hallway in front of 3 doors with a light above and when someone comes out, I go in, take everything off from the top up, and stand there.  It got a little hazy after that, but I thought I'd figure it out.  It was a little tiny room with a door on each side, so I stood there, topless, cold and a little confused until 5 minutes later, the door on the other side opened and I walked into a large room with two people in it and a few machines.  One of the people basically threw me up against a screen to give it a very hearty hug while they Xrayed my chest.  I was barely out of the room, before another door was swung open.

I dressed and sat back in the main room again until a doctor called me with my new Xrays in hand.  Things looked good and I got the Xrays as a parting gift.  He asked me a lot of questions about my health, vaccines, prescriptions, and luckily he spoke very good English so it went well and he couldn't have been nicer.

I was then dropped to a chair outside another door for the final section of the process - paperwork and French test.  I was more than a little nervous for the French section, but I did ok, handing her the right documents when she asked and telling her where I was from, how long I was in Paris, and then I thought she asked what I was doing in the city, which is always a daunting question for me.  I rambled some nonsense and then she stopped me saying that wasn't what she asked.  Dang.  Please don't send me back to the US yet, I thought, but she kept shuffling the papers around, while I tried to be calm and nice, and voila, she put the new sticker on my Visa allowing me to stay a year! 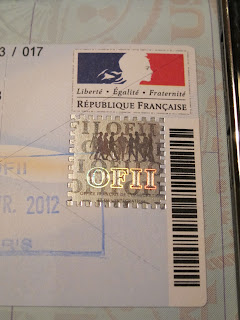 Paris is going to be stuck with me for a while!

Since A is for April, I'm heading to Andalucia this week with Stephanie for a few days.  Looking forward to exploring the South of Spain.  Until then!
Posted by Kelly at 4:21 AM