It was exciting to not only be in Paris on election day, but to also be steps from the Bastille, headquarters for supporters of the new President, Francois Hollande. 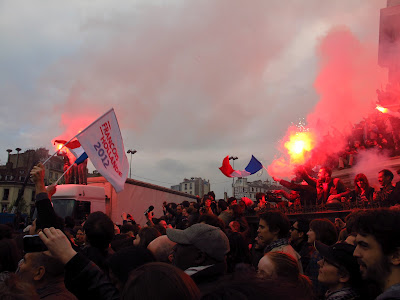 Set-up began early in the day, with stanchions being lined up, along with many media trucks. 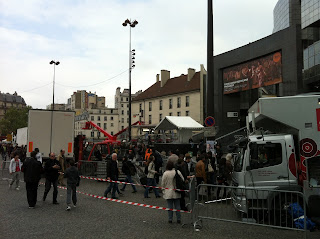 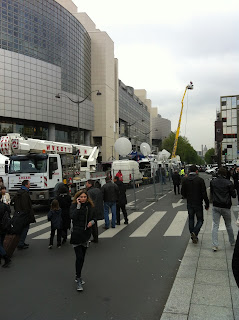 Most of the French people I spoke to wanted Sarkozy, or President Bling-Bling, out of office.  They feel he's lost touch with the common people, and was just enjoying life in the fast lane with his rich friends and fancy watches.  Whereas Francois Hollande bills himself as Mr. Ordinary. He's also held some unfortunately nicknames like "the marshmallow" and "Flanby", which is a wobbly caramel pudding. Hollande likes driving around Paris in a scooter, and some said he has looked a bit like the Pizza Hut delivery guy instead of the next President. Most of my ex-Pat friends wanted to see Sarkozy stay in office. 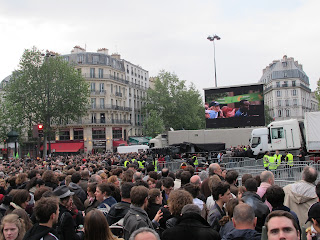 A French friend of mine voted "blanche."  He basically turned in a blank, white sheet because he didn't like either candidate.  He also said he doesn't want to be responsible when things go wrong for voting for the leader in office.  Hmmm. 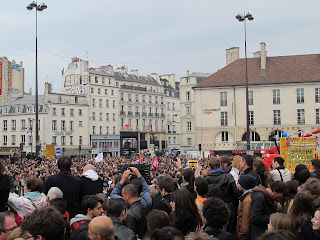 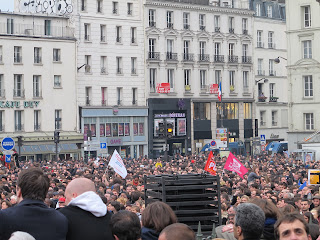 This same friend doesn't like Hollande because he doesn't have a strong immigration plan, and he doesn't like Sarkozy because he wants people to work too hard.  I explained to him how Americans have a bit of a laugh at the French for complaining about their 35 hour work week, while we work 50+ hours per week in the US.  He countered with, but what kind of life is that?  Your living to work and spend all of your time in the office thinking about work instead of living life with family and friends.  Well yes, there's that, but I'm probably the wrong person to have this "work hard" debate right now, though I did talk about how slow the French government systems are, and maybe if they spent more hours in the office, things would run more efficiently.  The funny thing is my friend didn't know the word "efficient."  There's no translation for efficiency in France, and that explains a lot. 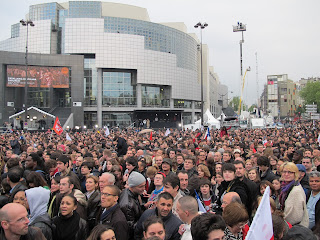 There were tens of thousands of people gathered in Place de la Bastille, waiting for the official results to be revealed at 8pm precisely.  There is a ban that doesn't allow the disclosure of any voting estimates until the polls closed.  CNN would go out of business if they couldn't talk all day with their charts, holograms and predictions.  The fine is up to $99,000 for leaking any information prior to 8.  Of course twitter fans looked for ways around this with made up names and WWII inspired code.  Belgium was in on it too, and I actually got the results early from a French friend who got a phone call from a Belgium friend a little after 7. 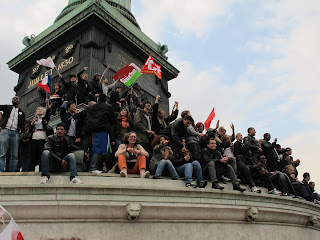 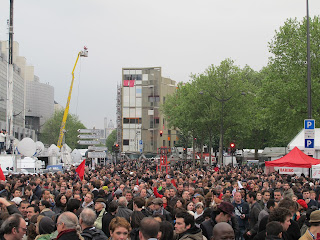 There were a lot of kids in the Bastille, but you would see some older people as well, though they weren't the majority.  The kids were drinking beer, and I saw an older group with a proper picnic set up amidst the chaos with blanket, cheese, charcuterie, and wine of course. 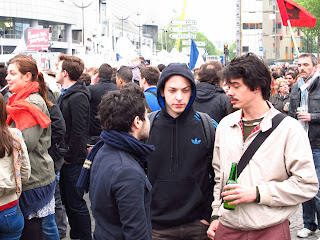 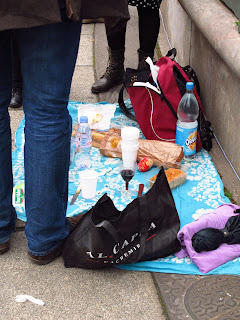 There were large screens set-up to watch the results and whenever Sarkozy's face came on screen, loud boo's would echo throughout, and of course Hollande's image prompted cheers and chants. 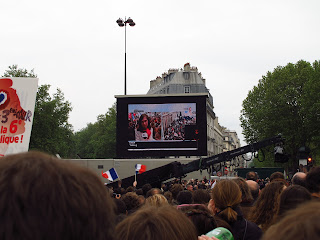 When the news of Hollande's victory was official, fire crackers went off, flares, confetti, singing, dancing, kissing.  I felt like I was in Times Square at New Year's. 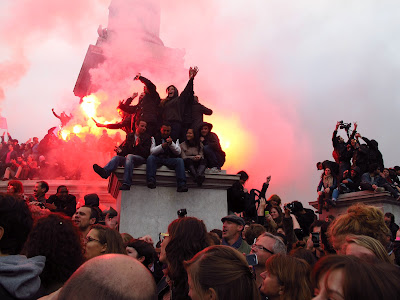 The partying went on long after I left the crowd, but I could hear the singing and music well into the wee hours of the morning.  I did hear some breaking glass, and then the police, and then the boo's.  I'm not sure what time the party officially ended, but my neighbors were still going strong at 4am.  Rough day for all of us today.

Hollande has a tough road ahead of him for many reasons.  He received 51.7% of the vote, which means he's got a lot of people to win over, though I'm not sure the rich will be his friend as he's planning on taxing them at a rate of 75%.  He wants to end austerity in place of growth and reduce the retirement age to 60.  Merkel supported Sarkozy's re-election, so he's got to make a new friend, and then there's Greece, and the Euro.  He may wish he was driving a pizza delivery truck at the end of all of this! 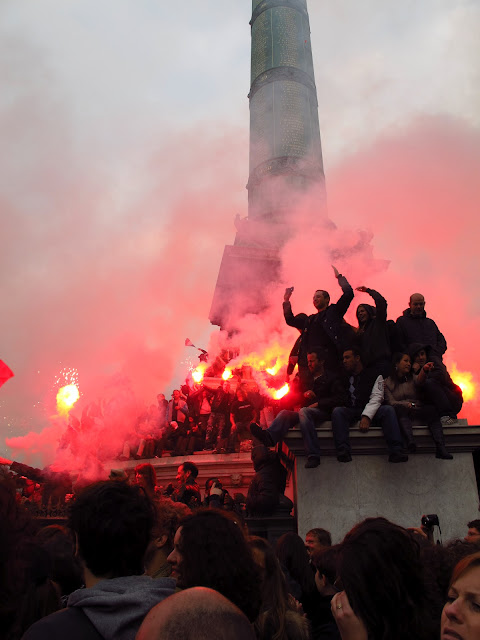