In the continuing spirit of discovering more creative cuisine in Paris and meeting more interesting people, I decided to "host" a dinner this week.  And when I say host, I don't mean in the traditional sense. This hosting required no cooking, no cleaning, and really not inviting anyone I know.  While I do love to entertain and organize dinner parties in my home, given my current Paris apartment challenged space, I did the next best thing, and organized a dinner in a restaurant. 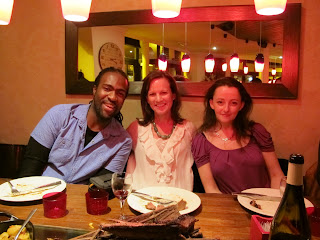 There are a few dinner groups in Paris, but getting in to the limited seating has turned into as big of a production as getting a table at the famed French Laundry.  Instead of complaining, I decided to organize a dinner of my own through the Paris Urban Adventurers.  All that was required was picking a restaurant, making a reservation, and coordinating a special menu if appropriate or sometimes mandated by the venue for large groups. 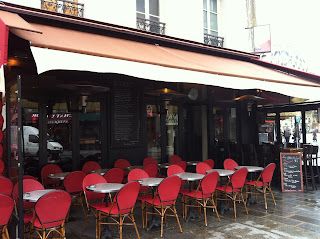 I picked a tapas restaurant called Dans Les Landes in the 5th arrondissement.  Yes, I know it's not French, but it's received rave reviews, and I'd been wanting to try it since I arrived.  Besides, nearly all food in Paris has a certain je ne sais quoi that always reminds you of where you are.  Another reason I picked Dans Les Landes is that it's good for groups and they let me reserve a large table for 12, which is pretty rare in tightly packed Paris.  They required us to do a tasting menu that would include their best tapas, their well-known duck, and dessert, all for 38 euros, which was a pretty good deal, so I booked it.

Once I did all of that, I posted the details online at the online social group's Meetup site, and hoped at least 12 people would sign up so I wouldn't be eating my weight in croquettes.  By the time the event rolled around, I had 12 eager diners, and 12 people on the waiting list wanting to go.  I ended up knowing about half of them from other food and wine events around town, so I wouldn't be dining with complete strangers. 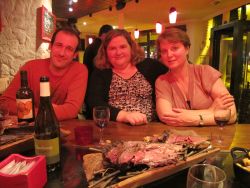 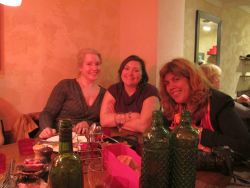 We received about 8 different tapas, each very well executed, in addition to being creative and unique, like this version of salmon wrapped sushi, which also was delivered with a fried roll containing smoky bits of pork. 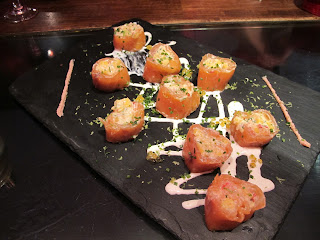 The presentation was also excellent like these fabulous fried polenta and jamon croquettes.  I want a dozen of those shoes filled with this delicacy! 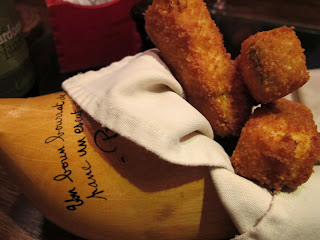 The Spanish tortilla was probably the biggest nod to true tapas as this is often seen on many menus in the region. 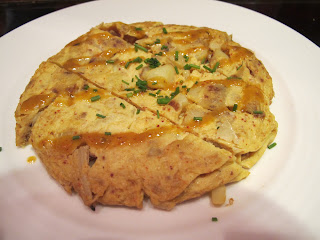 There was wonderful glazed chicken served in a cast iron pot, as well as one of our crowd favorites of shrimp served in a fabulous, creamy sauce with a little kick. 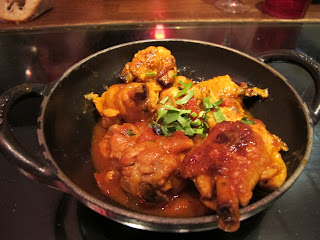 We were all full and content when the parade of plates slowed down.  Our waiter then asked if we wanted more tapas before our main.  Our main?  When the duck arrived, we all managed to find room for the smoky, citrus laden grilled magret. 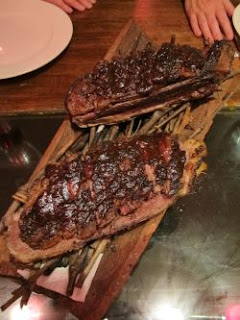 The dishes didn't disappoint all the way through to the trio of amazing desserts.  There was a salted caramel dipping sauce that will haunt and delight me for some time.  It's good to know it exists in the world. 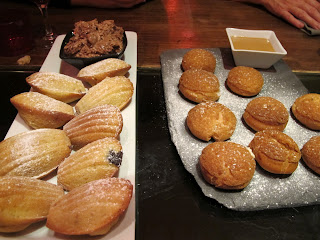 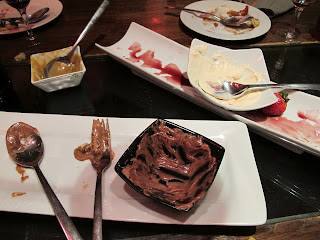 It was a fun evening made perfect by the amazing food and wonderful people, who were from places all across the globe including Tel Aviv, Ireland, Canada, France, and of course the US. 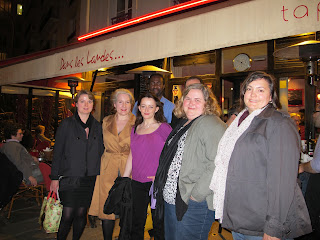