I know you're concerned that I've been back in Paris for over a week now and there's been no mention of food.  To reassure you that I'm not starving myself, though it could be possible this month with the many restaurant closures, be not afraid, I'm take care of myself.  Here are a few highlights. 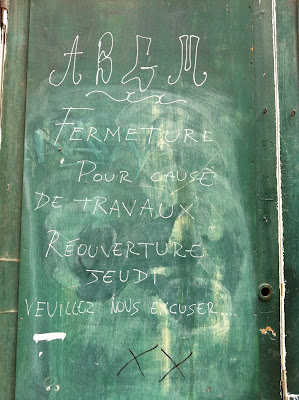 Nothing says Paris like steak frites so I went to try a new to me, but classic French bistro called Aux Tonneaux des Halles.  I heard about it from famed foodie David Lebovitz, but sadly, I found the steak lacking in flavor.  Luckily the multiple cooked fries picked up the slack. 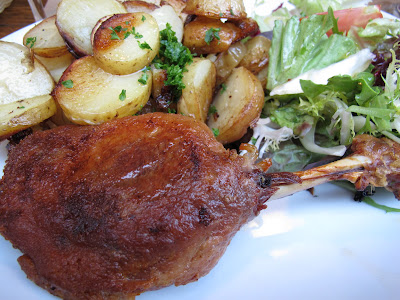 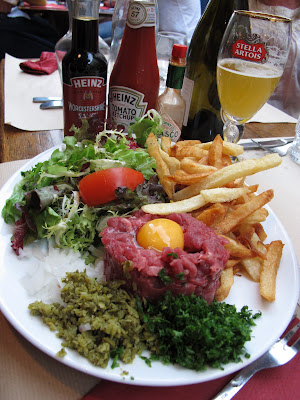 Fear not meat lovers, the duck confit was outstanding with succulent meat on the bone, browned and delicious.  The steak tartare was also a big hit.  With a nice wine menu and a good size terrace facing the bustling Rue Montorgueil, I will be back. 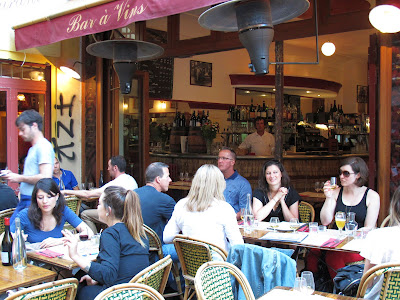 On the opposite end of the spectrum, I checked out a new lunch spot in the 11th, called CheZ aline.  It used to be a horse butcher and hence still has the "Chevaline" sign out front, but there's no live slaughtering going on here...at least that I can see. 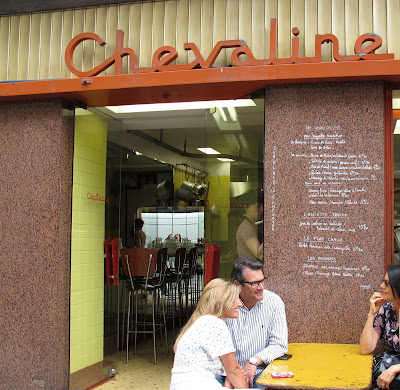 What is happening is a great new deli.  Yes, I said deli, but they're making unique sandwiches on fresh baguettes like the Prince of Paris ham (no royalty was injured in the making of the ham), smothered with artichokes and fresh pesto.  I paired that with a bright bean and sundried tomato salad, and off I went on a bike ride and picnic in Bois de Vincenne.  Magnifique. 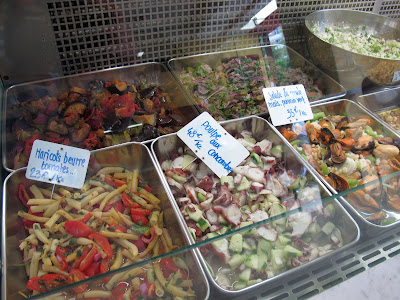 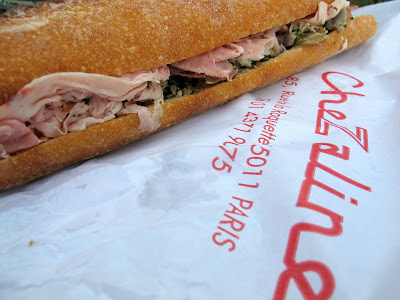 From horses to asses, I actually had dinner this week-end at a place called Derriere. 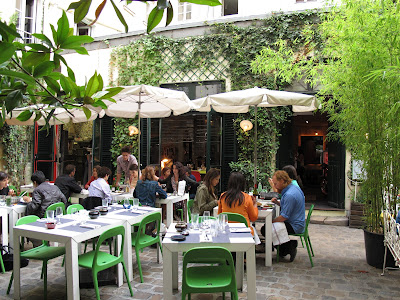 It's a happening spot in the 3rd with a big door hidden from the street that gives way to a playground complete with secret garden, souped up motorcycle and a ping pong table in the middle of the dining room. 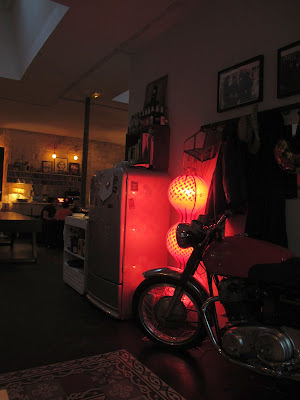 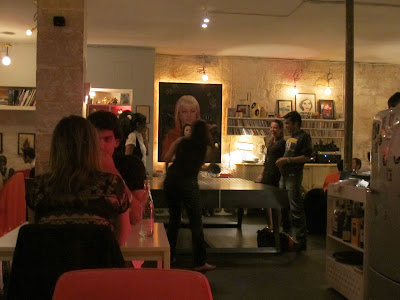 It's fun with friendly and cute waiters, and one of the largest restaurants I've seen in Paris, so great for a group or party. 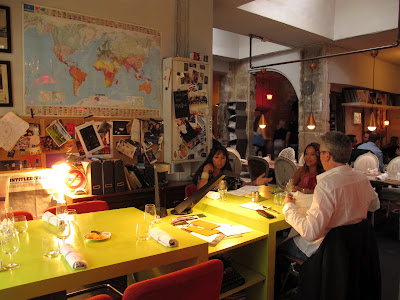 There were some interesting flavor combinations I hadn't seen before like eggplant and smoked fish in a sweet molasses sauce.  Can't say I'll order that again, but my fish in lemon butter sauce was divine.  Full review here. 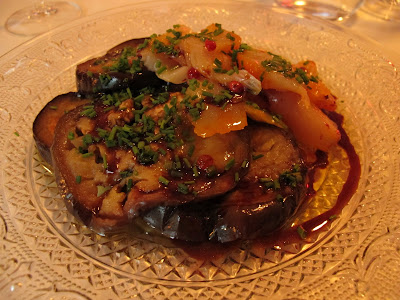 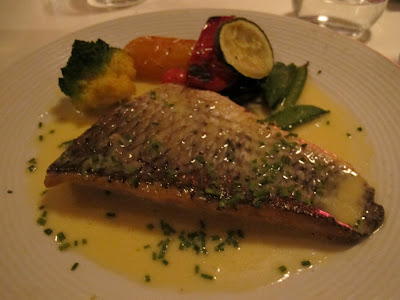 Next up was a return to Spring, home of an American chef who's made quite a name for himself in Paris. I've eaten in his restaurant and was a member of their wine club, but this week-end  was a special meal they were serving for 3 days only before their summer closure.  The only thing on the menu was lobster sandwiches and fries cooked in duck fat.  Winners all the way around. 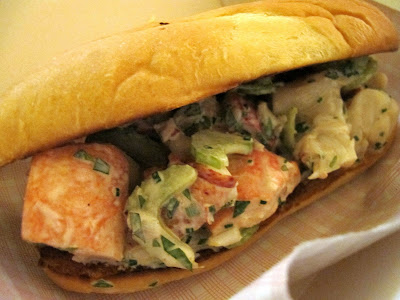 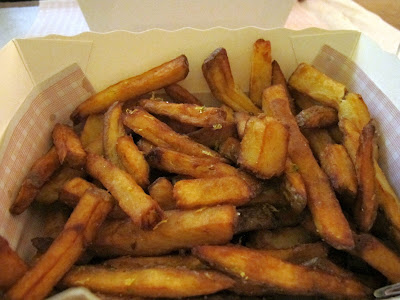 The final stop of the week-end was a new wine bar near Les Halles and Rue Montorgueil called, L'Art Source. 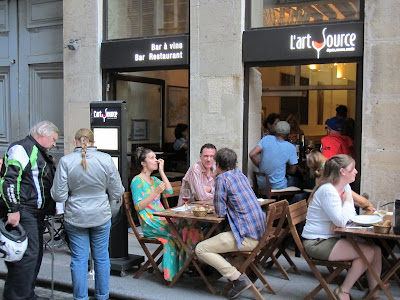 We were quite literally the first one's there, for the day at least.  It opened back in November and is the brainchild of a lovely Frenchman who's been traveling the world and wanting to share accessible wines and food with the masses.  Voila. 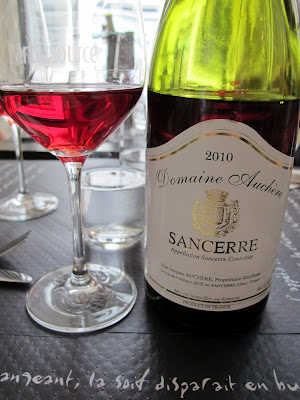 He was very enthusiastic to recommend wines for us, and pushed us to try new things, which we enthusiastically did, though I have to say, when we asked for our next bottle recommendation, he said, "already?"  We're eager students.  There's a great tapas style menu as well with nice pairings all the way around.  My Girls' Guide to Paris review is here. 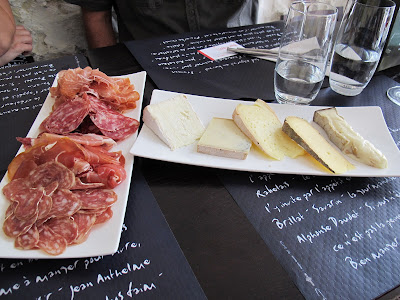 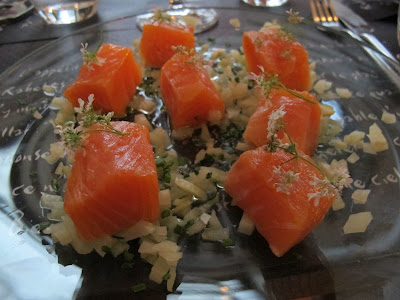 It was a very enjoyable first week back, and good to reconnect with the Parisian gang. 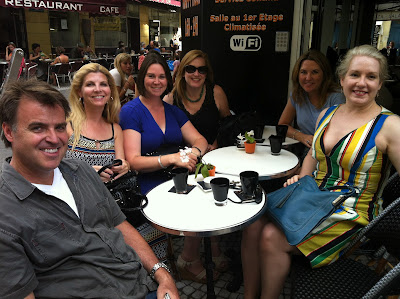 Lucky me, I'm about to catch a train to London for some Olympic action.  Cheers!