The Dog Days of Summer

Les jours chien d'été seems more appropriate, but more accurate is the roman translation of diēs caniculārēs.  No matter how you slice it, it's hot.  Paris got its first heat wave of the year.  It was 100 degrees all week-end.  I'm currently welcoming the drop to 90. 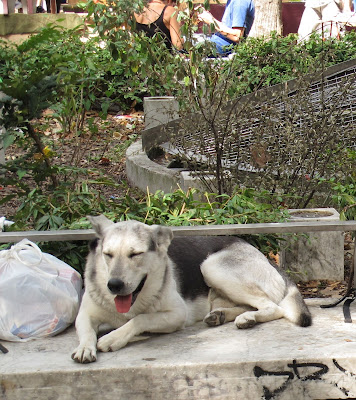 The heat almost feels appropriate for the pace Paris is moving right now.  With all the locals out of town, there's a quiet stillness to the city as it slowly ambles to the pending rentrée when Parisians will re-enter the city and go back to work after their 5 week breaks.

I went into this peacefulness kicking and screaming, but eventually succumbed when I caught a nasty cold that when combined with the heat, sapped all of my energy, and literally left me speechless.  With no voice and most of my friends joining the city in taking their vacances this month, I've used this time to do a lot of reading and writing.  I think I now have read every word Hemingway has written about Paris, and while I can't say I could keep up socially with him and his lot, nor would I want to, I may start taking my writing to the cafés.  I'll do my best to avoid whiskey during the day (at least until winter), although he does recommend writing drunk, but editing sober.  More research to follow.

More troubling than my chicken guy and friends leaving for a holiday this month, is the new wave of friends I have that are moving out of Paris permanently.  My college friend Jen who lived in Paris for over 10 years, left the city while I was in LA last month, and then my friend Stephanie just sadly moved back to the US - actually I think it's more sad for her than me as she was not finished with her 8 year life abroad.  I did get to join Stephanie for her "last supper" in Paris at Les Ombres, and there can't be a better view than this for your final farewell to the City of Light. 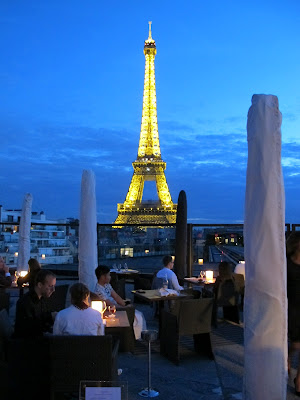 I remember Jen telling me when I first moved here that she really tries not to befriend ex Pats anymore since she's tired of investing time in developing friendships with people who aren't going to be around long. I recall thinking how horrible that sounded, especially since I was the new kid on the block, but now I find when I'm at social events and learn someone is only in town a few months, I slowly drift away in hopes of meeting someone with longer term potential.

But with the ex Pat relationships, also come new global friendships.  I was able to visit 3 friends in London during my Olympic trip, 2 of whom used to be fellow Angelenos. I have a friend from Stockholm coming to Paris in a few days, and I was able to catch up this past week-end with a new friend I made this year on my Morocco trip.  So the tides continue to release some back, but also bring others in.

And then there's Claire.  Claire entered my life less than 2 weeks ago, and in that short amount of time, I've spoken to her more than anyone else this year.  Qui est Claire?  Claire is the 85 year old friend of my Parisian landlady who was selected to help shepherd a few home repair projects in my petite abode.  Claire doesn't have a computer, e-mail, TV or fluid in her joints, but she does have a phone and she has my number on speed dial. 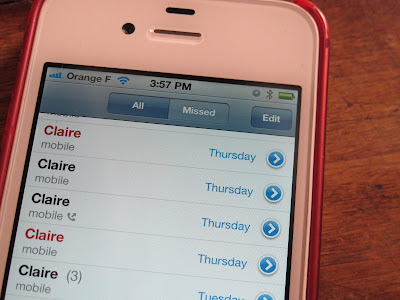 I haven't needed to use my alarm all month since most mornings begin with a call from Claire.  There's questions about the water damage to the place that happened while I was in LA.  There's the setting up of appointments, including one for her to simply come by and read some e-mails from my landlady, even though she would be there the next day with a plumber.  She's called to make sure I've had a good sleep, and she's even called right after I spoke to her, asking if I had just called.

All that said, in those 2 weeks, we had insurance people through, as well as multiple visits from the plumber who finally has fixed the toilet and bulb issues I've been having.  As you may recall, I tried in vain to get a handyman back to my place for these fixes for over 6 months, but evidently I was too young for the job, and leave it to Claire to fix it all, including my cough and French.  For the cough, 15 drops of essential oil of thyme on a sugar cube (huh?), and for the French, get a French boyfriend bien sur, but not online.  I'm guessing she didn't have any luck there.

Claire and I (or maybe just me) had a fond farewell, and she phoned later to tell me to call her if I ever needed anything.  I think I'm going to take her on all my future French errands as she knows how to get the job done, assuming I switch to an unlimited calling plan.  I should have taken her with me to open my bank account at the beginning of the year.  I've been swimming along just fine with my French account and then I got a piece of mail that said one of the forms I filled out over 6 months ago needs to be in triplicate so they need me to refill it out and send it to them.  Yes, you might think they could simply copy the first one, but that's where you'd be wrong and not capable of living in France.  So I did as they said, sent it in, got an e-mail confirming they received it, and then told me that I put some incorrect information on it and that my signature looked different.  This then sounded the alarms and now not only do they need me to do the triplicate form again, they now need me to submit 6 other pieces of information including the passport of my landlady.  Sounds like a job for Claire, non? 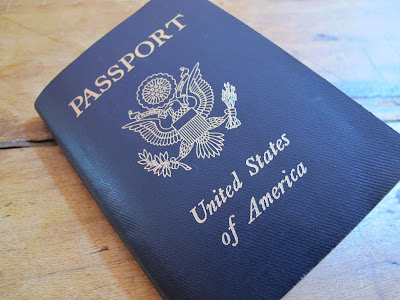 Then there was the issue of me needing more Passport pages.  It's something I've actually had on my goal list as I've been jealously eying all of my global friends' thick proof of much travel, and at last, the day has come.  I found a few week window of time when I wouldn't need it (difficult yes) and then off to the post office I went for 45 minutes of excruciating bad French postal terms, charades, phone calls and prayers as I hoped I sent the right things, in the right envelopes, with the right return postage.  I left in a cold sweat, feeling very naked and very helpless without my Passport, hoping I would see it again, and see it before my next trip in September.

I anticipated at least a few week turnaround time, but I was awoken this morning, not by Claire, but by my buzzer door with a man speaking French about something.  "J'arrive!" always appears to be the right answer and I walked downstairs, only to find an envelope with my writing on the outside and my passport on the inside.  It took 2 days, and that's why the August vacances aren't all bad.  With dozens of new, blank pages in my passport, I feel like I have a full tank of gas and am ready to go. 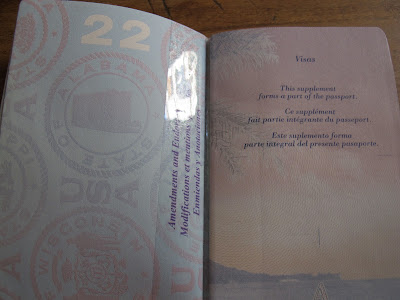 "If you are lucky enough to have lived in Paris as a young (wo)man, then wherever you go for the rest of your life it stays with you, for Paris is a moveable feast." Ernest Hemingway