As the throngs of August tourists have left the city, my visitor season has just begun, and it will be my most challenging one yet because these visitors are, to put it politely, not quite as enamored with Paris as I am.  Being the good people they are, they are still willing to come see me in the city where they don't understand why we have to share the sidewalk with dogs who use it as their toilet, except the pavement doesn't flush.  So of course I feel its my duty to change their decades old perception of Paris, the French and their dogs in a few short days, or at least give them a glimpse of why I love this city, in case they can't read another word on my blog.

First up was my brother Mark who sent his wife last year as he thought she'd be a better family representative than he for a visit, but a year later, and many J'adore Paris comments by me after, he decided to test the waters for himself.  I think one of the main draws was the falafel (no sadly, I think I'm a distant second), and as is my new custom, L'As du Fallafel was our first stop.  Mark made me mix things up by having me order a chicken schwarma pita alongside the standard fallafel, and that was indeed a good addition, but it's still a Fallafel wall of fame I'm building with my visitors. 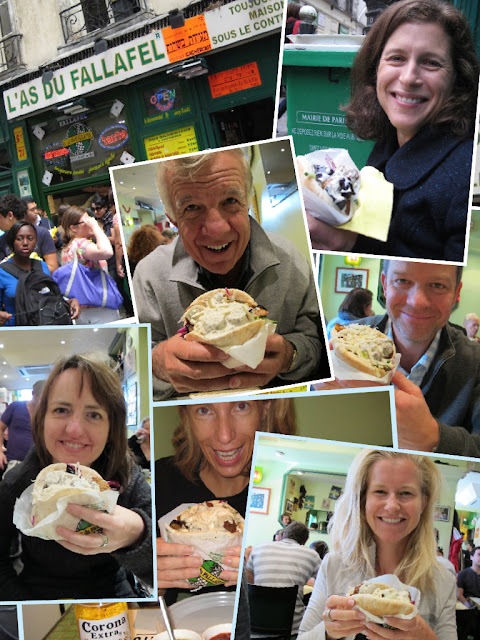 We made some good attempts at appreciating art, but perhaps fell short in some places. 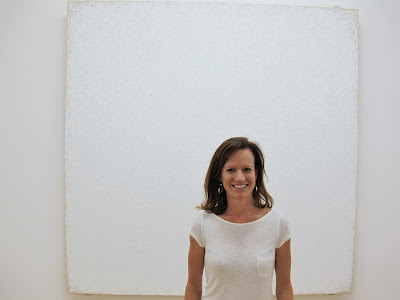 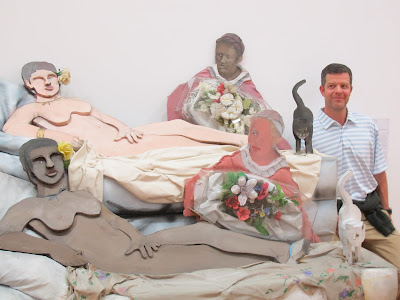 Tell me how you go to the Rodin Museum and not imitate the statues?  We weren't the only ones, but I like to think we had the most finesse. 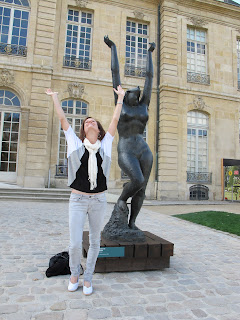 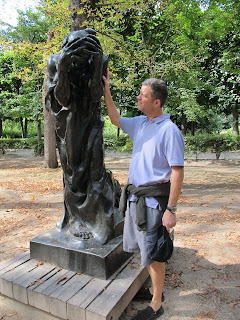 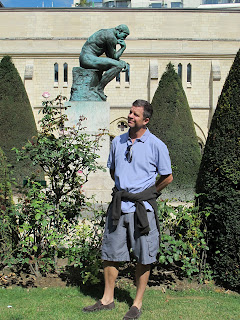 We hit some of the major sites and got some family photos for the next holiday calendar. 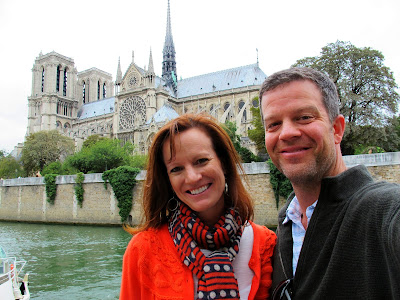 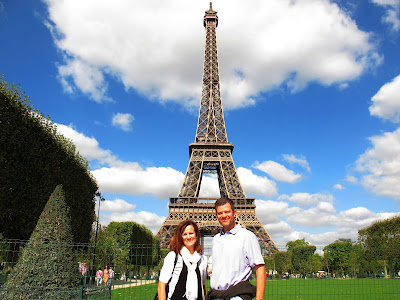 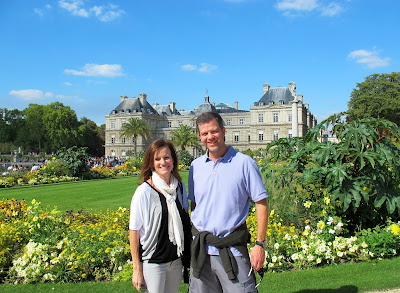 We even saw a wonderful Vivaldi performance of the crowd pleaser Quatre Saisons in the beautiful, tiny, stained glass Sainte Chapelle. 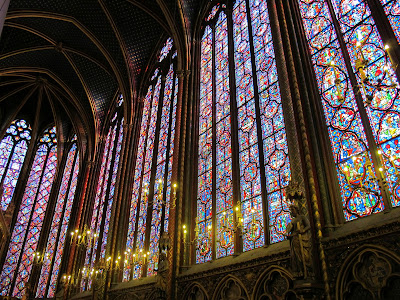 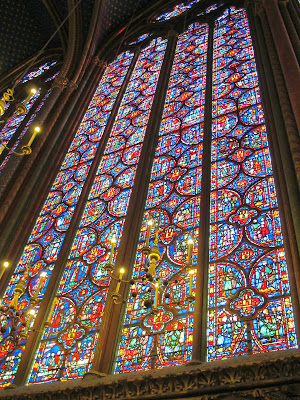 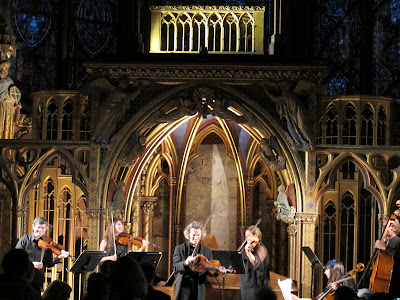 And of course we did some eating above and beyond the falafel.  We ate foie gras at two meals, which shows how much Mark liked it the first time.  I took him to several wine bars, including Frenchie's new expanded cave, which is such a delight to have the additional space, but hopefully I'll be allowed back since Mark doesn't drink wine.  I had to ask the sommelier if they had beer.  This is the sommelier of one of the best wine bars in Paris.  Luckily they had ONE beer, and Mark drank it all night, along with another new favorite of his - creamy burrata with roasted peaches and basil, and the sweet and savory pork sliders were also a hit. 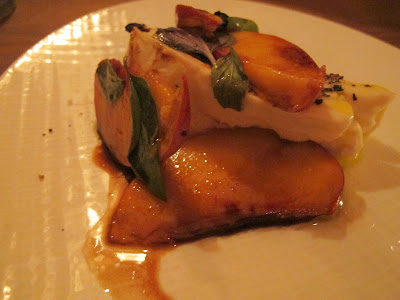 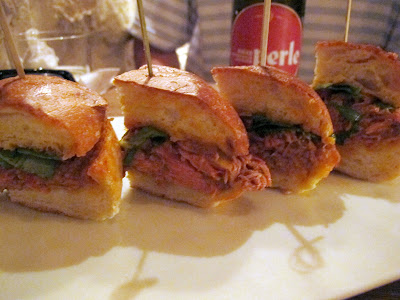 Mark requested jambon et fromage, and we indulged at two meals, in one day.  The first was in crepe form with an egg, and the second was on a plate with fork and knife, at least for me.  I couldn't quite get Mark on board with the "proper" way of French eating with their fingers never touching anything but their silverware.  He even broke bread with some of my friends, who it appear I'm still friends with after the meal and him again ordering the ONE beer at the wine bar. 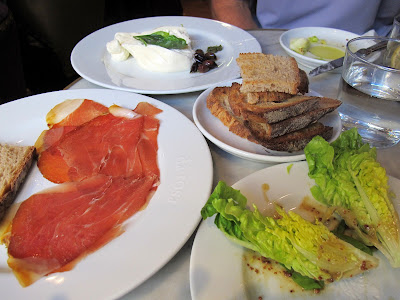 Mark's final meal request was to try the infamous Mexican food he's heard me talk about eating here.  I was reluctant to take him, and he was reluctant to try, but in the end, he was a believer in Candelaria like I am.  Good guac, cactus tostada and a Negra Modela made him a happy boy in Paris. 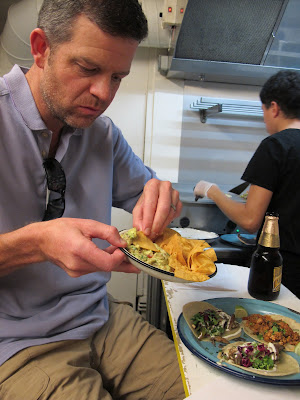 I like to think that I made a dent into his Parisian (mis)perceptions.  Paris delivered the sites, the food and wonderful weather, including a beautiful grande finale sunset which will hopefully be stored away for my brother, along with nice, new memories of Paris. 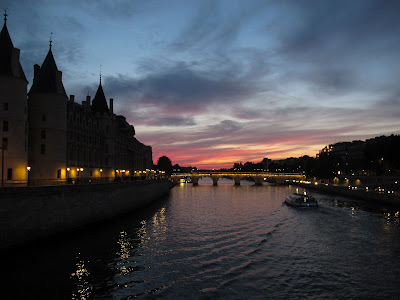 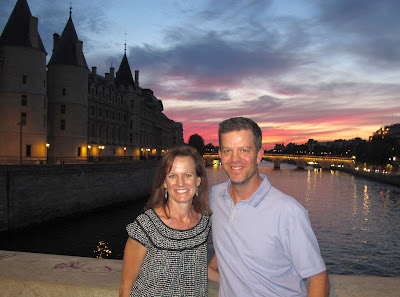