I have heard people talk about Chateaubriand long before I even dropped my first bag in Paris.  What I'd heard ranged from...it's the best to, I just don't get it.  The reviews have always swung from one extreme to the other.  There was no, yeah, we had an ok meal there.  It's been on The World's 50 Best Restaurant list for 4 years.  Last year it was number 9, and this year it's at 15.  I decided it was time to form my own opinion on this much talked about restaurant.

Our latest and most successful way of getting reservations in tough to book spots is by first enjoying the restaurant's wine bar as we did with Frenchie, and then popping over in person to the restaurant to get the next available table reservation.  We did just this last week-end.  We did need to reserve at Le Chateaubriand's next door wine bar, Le Dauphin (as we unfortunately learned one hungry, thirsty night when we were turned away), but a meal here was a more than satisfactory way to pass the time until our dinner at the big brother arrived only a few days later.  You can also try your luck by queuing up for the free-for-all 10pm open seating at Chateaubriand.  When we walked by on Saturday night, the line was quite long and I don't think those people were going to be hitting their amuse bouche much before Midnight. 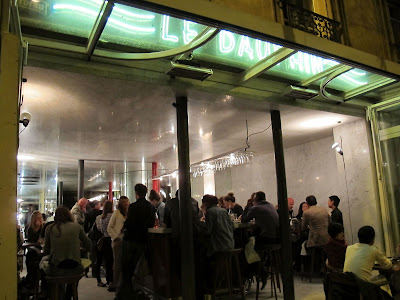 Le Chateaubriand is the brainchild of a self taught French Basque man, Inaki Aizpitarte, who's been called everything from a rock star chef and culinary genius to overrated and inflated.  The restaurant itself is bare bones and simple with clean, light colored walls, basic dark wooden tables and chairs and a beige, checkered tiled floor.  The wait staff wore faded rocker jeans and white button downs rolled at the sleeves, and worked at a fever pitch the entire time we were there, even running at times.  With that and a refreshingly pleasant demeanor, it was hard to be upset about the long lag time before getting drinks and our first dish.  It also appears that you're only as strong as your weakest, or latest link, since it's a no choice menu and everything is served at the same time for your seating. 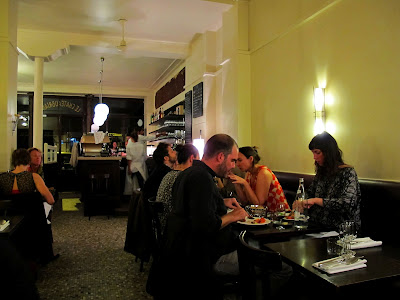 First up was a collection of amuses bouche.  Light as feather gougères were warm and practically melted in your mouth.  Luckily we each got 2 of these because 1 was not going to be enough.  These were accompanied by what was billed as ceviche and delivered as a tangy vinaigrette that you drank like soup and then found a tender piece of cubed fish awaiting you for your final sip. 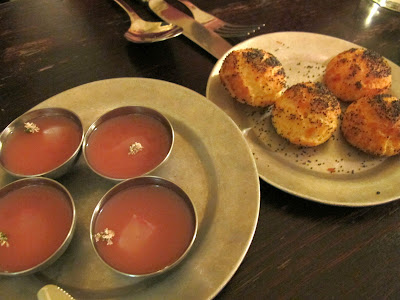 Next was a tiny frog's leg, not that I've seen many huge frog legs.  There was a raspberry butter encrusted on it, making for a one of a kind bite that left a little red, boneyard after. 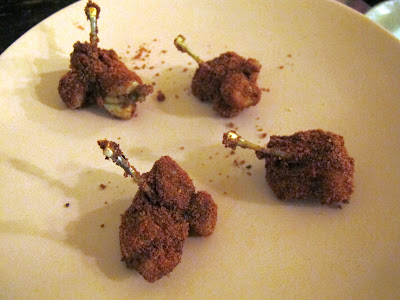 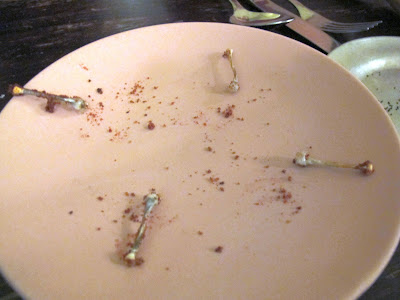 We were then presented bone marrow with beet root and celery which was all well and good, but the broth was beyond divine.  We only wish our promised bread had arrived before it was taken away. 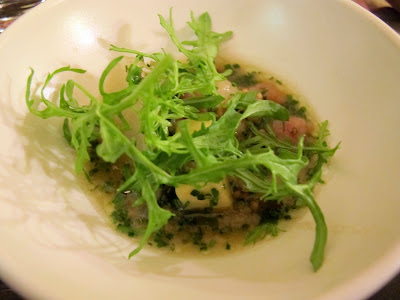 Our last amuse bouche was a lot of green on green action.  Lovely to look at, and delicious to taste. 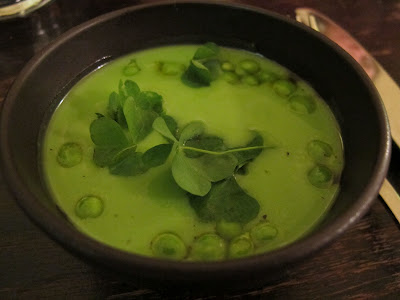 We could have left then and been very happy customers, but it was time for some bigger plates.  First up was tuna on a bed of potatoes sweetened with onions and cherries, resting next to paper thin, fried potatoes.  The cherries and potato "chips" were welcome pieces to this dish, which ended up being my least favorite due to an overly fishy taste to the tuna for me, but I still ate every last bit. 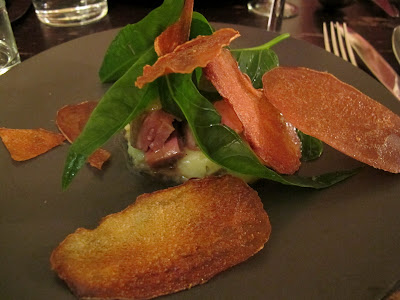 The next dish was my favorite with a well cooked barbue fish that had a nice, firm texture.  It was blanketed with a red spinach that had a more firm consistency along the lines of seaweed and the fried capers tipped the scales even further into pure bliss. 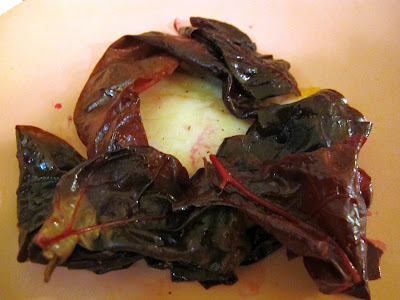 The pork was a close runner up for favorite with its smoky tenderness among paprika dusted tomatoes and vegetables. 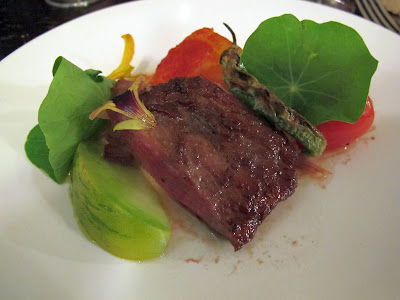 We had a choice between dessert and cheese and we all went with dessert to see what they could do since cheese is already a staple in our daily diet.  We were presented with a buttermilk ice cream, which you can imagine has a different consistency and taste, but what you may not be able to imagine is large pieces of mint and herbs added, amongst what I can only describe as a kind of malt ball.  It was refreshing and brought my already overstimulated palate further to attention. 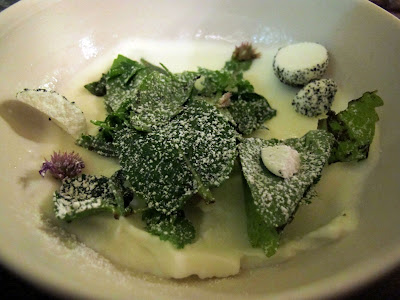 We were then told to eat the final dessert in one bite.  It was a beautifully perched, caramelized egg yolk, sitting on top of a crumbly cookie bottom and mascarpone middle.  We spun the plate and eyed the dessert from all sides, wondering how we could put this large, explosive object down the hatch in 1.  We voted and agreed it would have to be a minimum of a 2 biter. 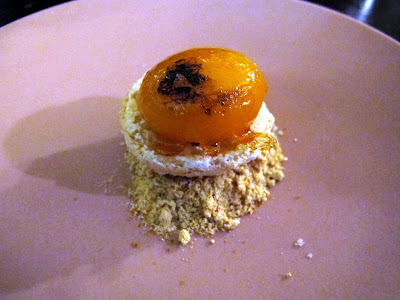 Some used their fork, but I tried for a bite in half.  At this moment, one of our rocker waiter dudes came to our table, surveyed the situation in horror, and said, and I quote, "Oh my god!" 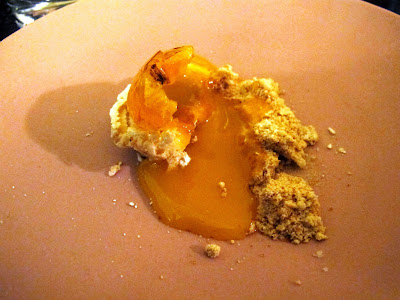 He looked like we just pulled the Mona Lisa off the wall and dumped red wine on her, which honestly, you could only hope would really put a smile on her face, but I digress.  The waiter was breathless and saw my friend with a utensil in her hand and said, "You're not using a spoon!"  We tried to explain c'est pas possible with one bite as another friend was on her 4th mouthful.  Despite horrifying the server, we loved this unusual dessert with sweet, savory, soft and crunchy and I'm not afraid to say I'd double bite it again. 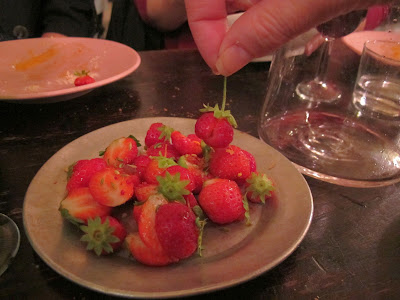 We did still receive some of the cutest, fennel dusted strawberries afterwards, along with a fairly reasonable check.  The tasting menu was 60 euros, and for a restaurant of this caliber, I think it was a good value.

I'm also pleased to now have my own very favorable opinion of Le Chateaubriand, which everyone in my party shared.  The restaurant offers unique flavor combinations that delight and surprise, but most importantly, taste very good.  I like the casual environment and friendly servers and would happily eat here again.  I even welcome the two step process of tucking into Le Dauphin first to enjoy some small plates before securing the Chateaubriand reservation for a later date.