This was my second Thanksgiving spent in Paris, and it was even better than the first.  It was a trifecta of meals, celebrating Thanksgiving and my birthday.  If you have to share a holiday with your birthday, it might as well be the one where a bunch of people get together to share a great, big meal.

I kicked off my birthday with a 10 mile run around the beautiful Bois de Vincenne with its serene lake and yellowing trees (though this picture was from summer).  I needed to make room for the meals ahead, and wanted some time to count my many blessings for starting this next year of my life in Paris. 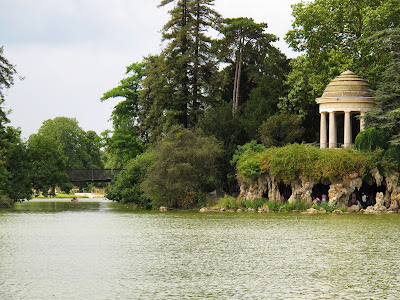 I got my birthday massage, and sorry, but it's not as exciting as that might sound, though it was a very good Thai massage that left me energized and ready for some serious eating. 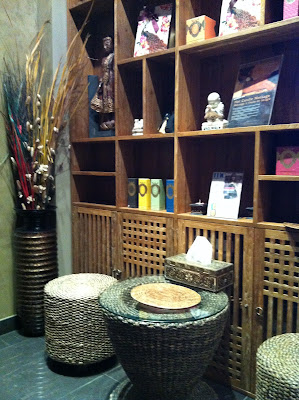 My friend Stephanie hosted the main event.  Her parents were visiting from WA where they own a working farm, so we were spoiled with local delicacies like handmade smoked sausage, smoked trout, and a fabulous sharp cheddar. 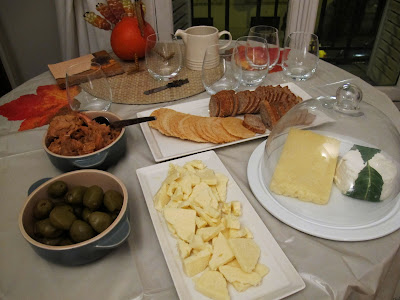 Stephanie's dad told us how they make everything, at my request and my hundreds of questions, and if he's not careful, I'll be taking him up on his offer of coming to the farm to try my hand at farm life.  Page in the Pasture has a ring to it, no? 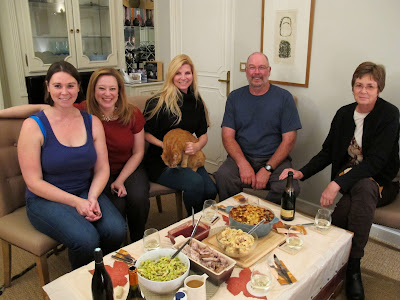 Stephanie made some wonderful turkey with dark and white meat, and of course braised with some bacon. 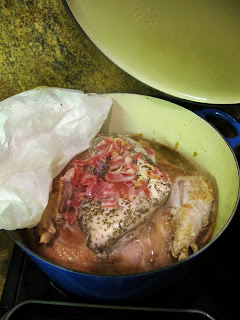 She even tried her hand at my mom's cornbread and sausage stuffing, and I will say she did the recipe justice, and I may have a few converts to the Page family stuffing. 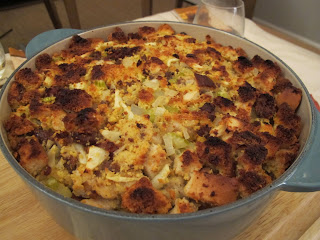 We had way too much alcohol that ranged from champagne to white to red to Pommeau, and all was delicious, even the red I had deemed undrinkable from Burgundy on initial taste.  After running out of red, I revisited the bottle and found it delicious after it had breathed for a while, and perhaps my palate was shot by then as well. 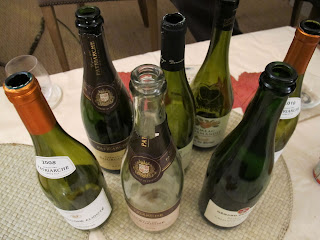 Lisette made a fabulous pumpkin and pecan pie and stuck some candles in for quite the happy birthday and wonderful Thanksgiving. 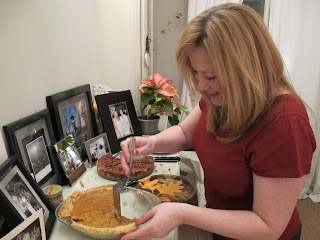 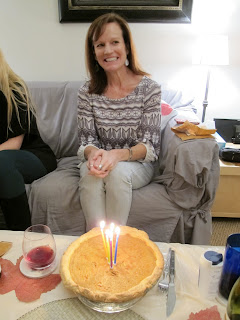 And all of this fabulous food came out of this tiny kitchen with 2 burners and 1 toaster oven.  Less indeed can be more is one of the valuable lessons that I've learned in Paris. 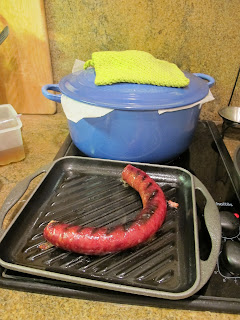 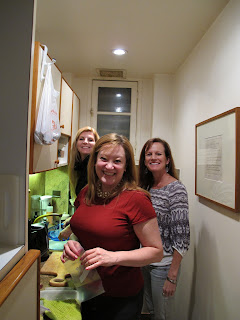 The even bigger treat of Stephanie's Thanksgiving dinner is that she and her parents were traveling the rest of the week-end, so we all got to take home leftovers, which everyone knows is the best part of Thanksgiving.

Just in case the leftovers weren't going to be enough, I doubled down on meals and went to the same Thanksgiving meal as last year at Shelley's house where she welcomes people from all over the world to enjoy the American feast. 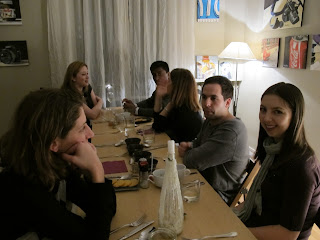 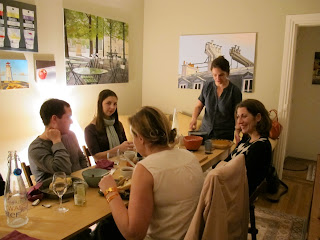 There was an Indian guy who was experiencing his first Thanksgiving dinner, and by the end, he was giving much thanks.  There was a woman from Barcelona who had lived in Chicago for a little while and loved the turkey day feast, so jumped at the chance to relive it in Paris.  There was a Polish girl and a German girl as well who love coming together to enjoy a good meal, and that we did.

We had a cheese taste test and naturally my team won. 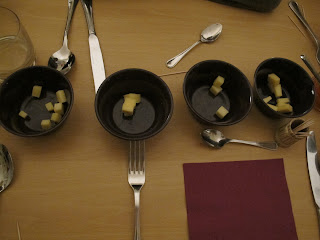 There was homemade garlic-parmesan rolls with sweet potato chipotle soup. 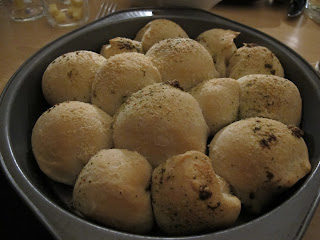 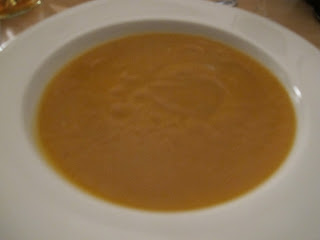 And while we didn't have turkey, we did stay in the poultry family with chicken, which always pairs well with stuffing and cranberry. 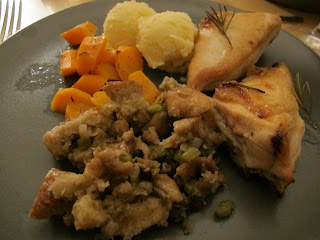 The finale was of course pumpkin pie with hand whipped Chantilly cream.  Delicious. 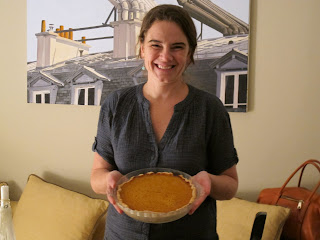 On the third night, I did rest...from turkey.  We went to the other end of the spectrum with some really good Asian food in a random location off the Champs Elysee called Kambodgia. 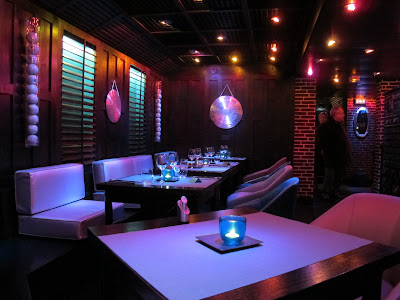 I had some fear walking into the place.  I descended the stairs into a basement with only two filled tables, and those tables emptied as soon as I got my first drink.  I will say that my fears were baseless as the food was really good, and the place did fill to capacity around 9:30pm.  It was nice to have a variety of flavors (and friends with me who like to share) from dim sum to shrimp papaya salad and egg rolls that might have been mislabeled as beef pancakes, but still really good and not greasy.  We had a table full of great food and great conversation that lasted over three and a half hours, which was actually the shortest one of the week. 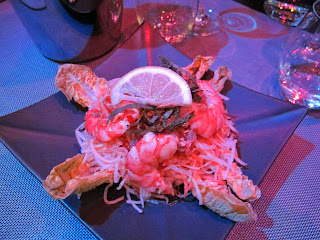 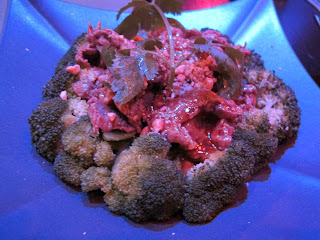 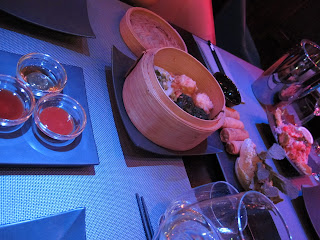 I'm standing as I write this, while running in place to make room for the remainder of the Thanksgiving leftovers, but tis the season for good food in great quantities!

I hope everyone had a wonderful Thanksgiving!